Star Wars and the Power of Costume” makes a stop at the Cincinnati Museum Center.

A galaxy far, far away isn’t going to be so far away any longer; it’s coming to Cincinnati and bringing all of its sci-fi, futuristic magic with it.

“This is kid-in-a-candy-store territory,” says Cincinnati Museum Center’s Cody Hefner, manager of media relations, referring to the highly anticipated “Star Wars and the Power of Costume” exhibit. It’s opening at the museum center May 25 and runs through Oct. 1.

Star Wars film director George Lucas’ futuristic world will be brought to life with the costumes of fan favorites. This includes Darth Vader’s foreboding black mask, C-3PO’s golden suit, the extravagant gowns of Queen Amidala, the iconic and somewhat controversial bikini worn by Princess Leia, and many others.

“This has been one of the most talked about exhibitions that we’ve brought to Cincinnati,” Hefner says. “Star Wars has such a dedicated fan base that really runs the gamut from grandparents to grandkids. Parents who grew up watching A New Hope with their parents are now watching The Force Awakens with their own children.”

People have a personal connection that goes beyond the love of the films themselves; it’s about sharing memories with loved ones. It’s about reliving those memories through the films. It’s a way for families and friends to connect with each other.

But you don’t have to be a Star Wars aficionado or even fan to be excited about this upcoming exhibit.

“If you’re interested in fashion, you’ll find it fascinating in its intricacies and the extravagance of Queen Amidala’s gowns, for example. If you’re a fan of theater, writing and storytelling, you’re going to be fascinated by the costumes’ role in storytelling and the process of fleshing out a character beyond what’s written in the script by designing a costume that tells some of their story for them,” Hefner says. 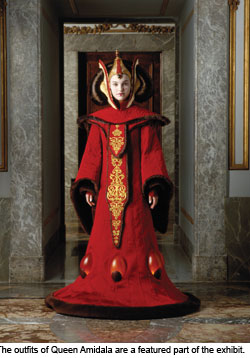 If you are a die-hard Star Wars fan, though, Hefner says you’re going to be blown away when you come face to face with Darth Vader’s mask and so many other iconic costumes that have shaped the characters who wear them.

In the museum’s press release, Lucas says, “Craftsmanship and artistry in costume design are valued creative components in the Star Wars saga. The detailed precision of a design can be as bold a measure of storytelling as words on a page, leading to truths at the core of a character, situation or shared history.

“From initial concept drawings to complex physical constructions, the costumes featured in this exhibition serve to further define crucial aspects of worlds created to move, educate and entertain us—to inspire the imagination.”

The exhibit will feature 60 of the best handcrafted Star Wars costumes from the first seven films. There are nine “chapters” to explore.

These include: Introduction: Dressing a Galaxy; Jedi versus Sith: Form, Function and Design; Concept and Design for Royalty and Beyond; Symbolism and Military Power; Outlaws and Outsiders; All Corners of the Galaxy: The Galactic Senate; and After the Throne: Padmé’s Journey; Darth Vader: Iconic Villain; and Droid™ Design.

This exhibit continues the museum center’s goal to bring blockbuster exhibitions to Cincinnati. The center is a multi-museum complex within the historic Union Terminal, a National Historic Landmark built in 1933. The Museum Center features three museums: the Museum of Natural History & Science, Cincinnati History Museum and Duke Energy Children’s Museum in addition to an OMNIMAX Theater and a special exhibition gallery. 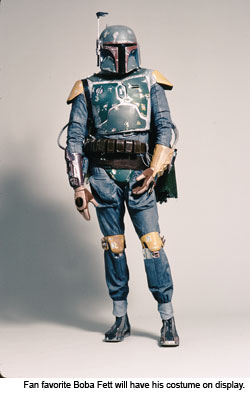 For the first time, the building is undergoing a full structural restoration. It’s a $219 million project addressing damaged steel and concrete as a result of water damage and outdated construction techniques.

In addition to the Star Wars costume exhibit, there are two new permanent exhibits added to the Duke Energy Children’s Museum in the past year: “Inside the Grin,” in partnership with the Junior League of Cincinnati’s GrinUp! initiative, which displayed a large anatomically correct mouth for oral healthcare education for kids.

There is also KidSPACE, an interactive play lab where children can paint, use clay, build their own Rube Goldberg contraption, engage in light and shadow play, practice sewing and knitting, and even use 3D printers and computers for coding.

But when it opens, there will be hordes of fans and Stars Wars newbies alike swarming the new main exhibit.

“Each exhibition is unique in its subject matter and presentation,” says Hefner. “Each has its own gallery layout, color scheme, lighting, sound effects and music. But as with any exhibition we bring in, and particularly with an exhibition like this that uses so many original artifacts, we take great care in the handling, security and presentation of the objects.”

He hopes that this new exhibit will take visitors to a place they may never get to visit in a unique and educational way.

“And really, how many of us will ever get to travel to a galaxy far, far away?”