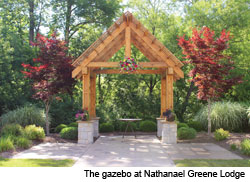 Green Township is growing steadily and the Nathanael Greene Lodge celebrates 20 yearsKevin Michell Green Township, one of the two largest townships in Hamilton County alongside Colerain, has been on the upswing over the last decade and it doesn’t show any signs of slowing down.

It’s been spurred in part by major development projects such as the arrivals of TriHealth’s Good Samaritan Western Ridge hospital in 2010, Mercy West Hospital in 2013 and the Greenshire Commons residential area three years ago. One million square feet of medical facility and office space has been constructed over the last nine years, including an 88,000-square-foot expansion to the Good Samaritan building set to be completed early next year.

As a result, Green Township’s daytime population has ballooned, requiring more housing for the many professionals who want to live closer to where they work.

“The last five years,” Birkenhauer says, “Green Township has put in more single-family building permits than any other community in Hamilton County but for the city of Cincinnati.”

The nearly $1 billion in commercial development and corresponding increase in homes being built and sold has retailers flocking to the area to seize the opportunity.

The Harrison Greene retail development opened in 2015 to anchor a bona fide entertainment district on Harrison Avenue. Its tenants include Graeter’s Ice Cream and the west side’s only Dewey’s Pizza—both of which are among the top performing locations for their respective brands—as well as First Watch and Keystone’s Mac Shack. When the property sold in February for almost $6 million, it was an indication of how desirable of a commercial space it has already become—the sale price per square foot of the center equated to $342.

But Green Township officials know there is more to be done to support the growing community.

“It’s been very successful, but it’s not enough,” Birkenhauer points out. “People are still asking for more choices in terms of lunch and dinner options on the west side. We’ve got a lot of interest in different types of restaurants that want to move into this area.”

It’s a matter of playing catch up with the demand residents new and old are creating for additional dining options and amenities.

The latter is something the township is actively improving upon. A new playground tailored to younger children and those with sensory disabilities and autism opened in West Fork Park in October 2017. Full of unique and inclusive features like a colorful maze and a turf-covered climbing hill, the park has been a huge success in its first few months.

“The biggest complaint is that we need more parking,” says Birkenhauer.

The township also purchased 5 acres of land adjacent to Kuliga Park for expanded development. The park hosts many events during the year, including the township’s signature Independence Day Celebration Concert and Fireworks event held every July 3. The 2019 edition will feature Reds Hall of Famer Ron Oester and music from Saffire Express Band and up-and-coming local outfit The Midwestern in addition to, of course, fireworks.

Also in October of last year, Green Township opened up its bike and walk trail, which Birkenhauer considers a hidden gem of the area.

“It was an old rail line that was made into a bike trail,” he says. “That’s something that has really taken off.” The trail runs 2 miles between Oakdale Elementary and a trailhead with parking off Hutchinson Road while passing behind Harrison Greene. Plans are in place to eventually extend the trail north to Veterans Park, near one of Green Township’s local landmarks.

Nathanael Greene Lodge has stood just south of Veterans Park since 1999. In its 20 years of operations, the lodge has evolved from a place for holding civic and municipal meetings to an event space integral to the community.

Nestled in the heart of the township, Nathanael Greene Lodge is the primary gathering space in the community for social functions, fundraisers, organizational events and meetings, says assistant lodge manager Cindy Tabler.

Complete with three rooms that can adapt to any layout needs and food service offered by Vonderhaar’s Catering, the lodge is perfect for departmental meetings, offsite business functions and holiday parties. Because of its central location and quiet setting, it has also become a popular destination for wedding receptions and family gatherings, especially on the weekends.

The lodge is where Cincy Magazine’s annual Best of the West event got its start in 2017 and has hosted many receptions and community functions over the two decades. Its signature event is December’s Winterfest.

“A lot of the community participates in [Winterfest] because it gives back to the children,” Tabler says. The event brings together Green Township residents, members of the local Veterans of Foreign Wars to play Santa Claus and organizations like Cincinnati Children’s Hospital and area churches to benefit young ones in need. Hundreds show up for the four-hour fundraiser every year, Tabler estimates.

Nathanael Greene Lodge continues to be a community fixture and will remain an invaluable resource as Green Township continues to grow. It’s an exciting time for this west side community and its residents with even more growth sure to come.