Millions saved by “the light of a thousand suns.”

There was an ordinary electric fan on a desk inside a concrete building that somehow survived the million-degree heat and firestorm of the atomic blast over Hiroshima. The fan blades were skeletal, like August leaves scoured to the bones by locusts. One touch and it disintegrated like an illusion.

The story was told by a veteran who was among the first to land in Japan after the bombing. He was an Army baker, who worked overtime to feed the starving Japanese who emerged from caves.

Nothing was known about fallout. Little was known of radiation sickness. American soldiers were sent to Hiroshima and Nagasaki in late September 1945, only weeks after the bombs were dropped Aug. 6 and Aug. 9.

They saw rubble so deep it buried the roads. They saw nightmarish suffering and destruction that made them wonder if their own eyes were lying. As the weeks passed, the “atomic sickness” filled more graves on top of the charred ashes from mushroom clouds that were measured in miles.

Yet most of the veterans who saw the horrifying results have never flinched from their conviction that those bombs saved many more lives than they took.

That’s not how everyone sees it nowadays. To paraphrase President Reagan’s joke about his opponents: It’s not that we don’t know anything; it’s just that most of what we know is wrong.

In 1995, on the 50th anniversary of the atomic bombs, the Smithsonian Museum in Washington was forced to cancel an exhibit on the “Enola Gay” B-29 that dropped the first bomb, and the director was forced to resign, because many said what was presented in the exhibit was dishonest and anti-American.

Revisionists still insist the bombs were unnecessary—that Japan was on the brink of surrender or that a demonstration bomb on a deserted island could have worked as well.

In fact, despite catastrophic defeats at Saipan, Iwo Jima and Okinawa, Japan’s military leaders redoubled their demands for national suicide of civilians and soldiers. At Iwo Jima, all but 1 percent of 22,000 Japanese soldiers fought to the death or chose suicide. 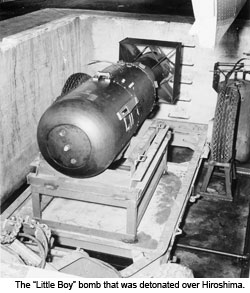 More than 7,000 Americans were killed in a week at Okinawa. Kamikazes (early suicide bombers) sank 47 U.S. ships while even thousands of civilians killed themselves to avoid capture. Shocked U.S. military leaders predicted that one American would die for each two enemies killed to capture the home islands of Japan.

Japan had 5 million soldiers and 10,000 planes to use in kamikaze attacks. Civilian deaths would have been horrific. Secretary of War Henry Stimson predicted invasion losses of at least 1 million Americans and 3 million Japanese soldiers and civilians. Japan expected 20 million to be killed.

A demonstration bomb was ruled out because nobody was certain that the bombs would work, and only two were available.

All that explains what the revisionists do not: Truman dropped the bomb as a humanitarian act to end the war. He said later it was the happiest announcement he ever made.

And even then, Japan refused to surrender. Fire-bombings had killed far more than the atomic bombs. Yet they fought on until Aug. 15, when the emperor overruled the military with an unconditional surrender to spare his people.

“We used it to shorten the agony of war, in order to save the lives of thousands and thousands of young Americans,” Truman said.