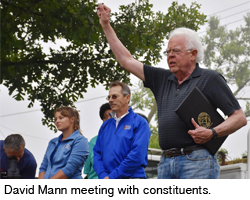 With decades of experience in politics, David Mann finds himself again considering running for mayorLiz Engel In some ways, David Mann can attribute the beginnings of his political career to Jerry Springer and the former TV talk show host’s “moment of disgrace.”

It was 1974, and Mann had lost his inaugural bid for Cincinnati City Council a couple years prior, his first attempted foray into public office. But when Springer, a political star on the rise, resigned his post amid scandal, Mann took his place. He’s now served, on and off, for a total of 26 years. And there could be more to come.

There’s been no announcement yet—and no timetable for one—but by late February, Mann had already drafted a fundraising ask—a letter he’ll send to contributors to test the waters. In it, he says he’s humbled by the “many voices urging” him to become a candidate. He quotes Howard Wilkinson, a political analyst for WVXU, who, in a recent column, calls Mann “a person of substance” with “more energy than many men half his age.” Jason Williams, a Cincinnati Enquirer columnist, says Mann will be an instant contender if he joins the race.

For what it’s worth, Mann agrees.

“I’m not going to run for Congress. I don’t have aspirations to be governor. Maybe once in my career I did, but not now, and I think there’s the operating assumption I care about public service—which is true,” Mann says. “We’ll see how it goes and make a final decision. I mean, the primary isn’t until next May. We’ve got to elect a president before that.”

Over the last half century, Mann has been among council’s most steady Eddies. He’s levelheaded, a voice of reason—a slogan he used in his last campaign—a constant.

Mann, a lawyer by day, also legislates much like he practices law. Mann went to Harvard and practiced at firms like Dinsmore & Shohl, Taliaferro & Mann and Thompson Hine before starting his own outfit in 1997 with oldest son, Michael. Mann & Mann generalizes in employment discrimination, civil litigation, personal injury, probate administration and more.

“In the local bar, there’s an emphasis on civility. Just because you’re on opposite sides of the case doesn’t mean you have license to be nasty—and experienced lawyers know you don’t win by being unpleasant to your opponent,” he says. “It’s not that different from what I do when visiting a community council or some constituents—show respect, show interest and show authenticity.”

Mann, a Northern Kentucky native, didn’t originally aspire to be a lawyer—or a politician. He majored in biochemistry as an undergrad with the goal of becoming a doctor. But he admired John F. Kennedy, the very first president for which he was able to vote, and was moved by his inauguration speech—“Ask not what your country can do for you, ask what you can do for your country”—and changed course after a four-year stint in the Navy. He made hints at a possible political career while at sea. And military service laid the proper foundation.

“Those four years were very important to me, in developing a confidence in myself,” Mann says. “In a lot of ways, the challenges have been the same challenges in politics.”

He married his wife, Betsy, halfway through his commission; this October, the couple will celebrate their 57th wedding anniversary. They decided to return to the Tristate—Betsy is from Northern Kentucky, too—because they wanted to be closer to family, turning down an opportunity in San Francisco post-law school.

Once here, Mann cut his political teeth putting up campaign signs for Jack Gilligan during his Senate run in 1968, going on to help Tom Luken during his run for Cincinnati City Council a few years later.

Mann made his first attempt for that same office in 1973, finishing 13th—only the top nine vote-getters are elected. But in 1974, Springer resigned—after the whole paying a prostitute with a check debacle—and Mann was in. Mann had to run again the following year, in 1975, and narrowly took that last spot by a mere 430 votes. But it was all the stronghold he needed.

He would remain on council until 1992 when he was elected to Congress, representing Ohio’s First District. He lost his re-bid for the House two years later to Steve Chabot in a wave election. It would be two decades before he’d opt to return to public office. He was elected to city council again in 2013.

There’s definitely memorable moments from each stint. Mann calls “Stress Day” the “most anxious day” he’s ever experienced. Following a surge in police officer deaths, Cincinnati cops lined Plum Street with cruisers, and, with lights flashing, marched up to city hall, demanding reforms. Tensions ran high. There was also the time he was summoned to the Oval Office to be lobbied for NAFTA. A Democrat, Mann voted for the pact, which angered a lot of his labor friends.

There’s been no shortage of controversy this term. From the long, drawn-out and public scuffle between current Mayor John Cranley and former City Manager Harry Black—who eventually resigned—to the federal probe into councilwoman Tamaya Dennard on allegations of wire fraud, bribery and attempted extortion, Mann’s been frustrated by the distractions. Perhaps it’s one of the reasons behind his possible mayoral bid. Overall, it’s been an “unhappy time,” he says, but there have been positives, too.

“During the [last] six years, we’ve dramatically increased the amount of funds we devote to human services. I take pride in that,” Mann says. “And I’ve been able to bring a lot of attention to affordable housing needs. We now have an affordable housing trust fund, with the revenues from the tax on Airbnbs. I hope we can do more.”

Come 2021, Mann won’t be the only council member term limited—there will be at least six new members, he says, after next year’s election. And, at least in his fundraising letter, he’s looking to position himself as the kind of mayor who could serve as their mentor. It’s one of many campaign platforms that could work for him, some more light-hearted than others (his last batch of political ads, for example, poked fun at his signature shockingly white hair). But he says the city deserves a “serious option” when it comes to mayor.

“I hope I’ve provided some stability [on council]. I’ve sort of seen everything. I’ve lived long enough,” Mann says. “Working to make the city better is important. And I still think I have something to offer.”