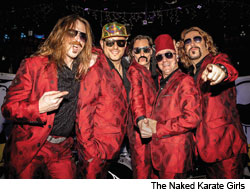 11 years after forming, Cincinnati band Naked Karate Girls keeps the party goingDavid Lyman “Just wow,” burbled a woman who identified herself as Lisa W. on the wedding-related website The Knot.

She was oohing and aahing about the Cincinnati-based band, Naked Karate Girls. And like the dozens of other people who offered online testimonials for the 11-year-old cover group, she couldn’t say enough good about them.

Admittedly, you have to take online reviews with a grain of salt. But I scrolled through nearly 100 of these reviews and there was just one that dipped below a five-star rating. And even that one—a four-star review—pronounced Naked Karate Girls an “Overall great band!”

I asked friends about them, too. Young friends. Old ones. Married ones. Single ones. Even a couple of terminally jaded friends. I couldn’t come up with a single person who had anything bad to say about the group.

But then, Naked Karate Girls is not your run-of-the-mill band.

“We are an interactive experience,” says Jimmy King, one of the band’s four original members. “Music is just one slice of our pie.”

Mind you, music is an incredibly important slice of that pie. Scan their playlist and you’ll see it’s a top-40 journey through the 1960-1990s with a smattering of country music tossed in. It’s familiar music. And fun.

But that still doesn’t sound like enough to add up to a 4.99-star rating.

To fully grasp their appeal, you have to go back to the beginning. That name, for instance.

They don’t play naked. Nor do they practice karate. And they’re not girls. (For the record, though, a couple of them admit to taking a few karate classes.)

The name, it turns out, is a complete fabrication. But it’s a well thought out fabrication. When the band was formed in 2008, the members searched out the top 10 Googled words. Among them were “karate” and “girls” and “naked.”

“So we took those words, switched them around and got the name,” says King. “We thought it was fun and catchy.”

There was a problem, though. Initially, church festivals—one of their mainstays—were hesitant to book a band with such a provocative name. But then, one particularly eager festival organizer asked if they would be willing to refer to themselves by their initials—NKG.

“We agreed,” says King, “and we sold all their beer on a Thursday night. After that, all the churches wanted us. “

It’s true that an ability to sell lots of beer will warm the hearts of promoters. But still, that doesn’t explain NKG’s extraordinary popularity with audiences, a popularity that sees them performing upwards of 200 gigs a year, from Key West to West Side Cincinnati, from Branson, Missouri, to dozens of weddings and corporate gatherings.

The key is showmanship. And charisma. And a boundless energy that finds them dancing and teasing and treating every audience member like an old friend. They invite people onstage and occasionally clamber down into the crowd themselves. They know the ever-so-fine line between poking fun at someone and mocking them. And they never cross it.

Sometimes they put on wigs. Or funny hats. And they dress for the occasion. At Hilton Head, they look like they just returned from the beach. At Put-in-Bay, they’re fashionably scruffy. But at wedding and corporate gigs, they channel the best of old-school rock bands and they wear suits. Of course, they may turn out to be splashy red suits with polka dots and swirling patterns all over them. But they look sharp as hell.

Most important, every moment of an NKG show is goodhearted. And generous. You inherently understand that they have just one purpose—to entertain.

This is no accident. NKG was not one of those garage bands that stumbled into success. That was the goal when they started. All four founding members had played in numerous Cincinnati-area bands for decades. They were long past the point where they were content with day jobs supporting the occasional gigs. They wanted to create a band that could provide them steady, full-time employment.

So they approached the founding of NKG as one would the creation of a small business. And they were determined to make it a smart business devoted not just to entertaining audiences, but also to helping their clients make their events more entertaining. (Hint: When was the last time you heard members of a pop band call the people who hire them “clients?”)

“One thing we always keep in mind is that when we are hired, it’s all about the client’s day, not our day,” says drummer Glenn Kukla. “We’re there to make them look like the hero. Ninety percent of the work we do is not onstage. We can be the master of ceremonies. We can organize integrated DJ music. We can execute any special programming that a client envisions. We’re like an event planning partner.”

They study audiences, paying careful attention to what songs work and, just as important, which ones don’t. And then they develop playlists accordingly.

“We want songs that bridge all generations,” says Kukla. It has proven to be a highly successful approach. So successful, in fact, that they found themselves having to turn down numerous gigs back in 2016.

So they did what many businesses before them have done—they cloned themselves. Over the years, enough musicians had cycled in and out of the band that NKG had a pool of former members they could call on in an emergency.

So in times of extreme demand—
typically the summer months and again in December—they cobble together a second NKG. Same music. Same costumes. Same shtick. There are always two of the original members performing with the group. But other than that, you’d be hard-pressed to tell the “new” group from the original.

None of this comes cheap, of course. Depending on what options you select, an NKG evening can set you back anywhere from $3,000 to $6,000. But with the average American wedding topping $30,000 (according to Brides Magazine), spending a few grand on such a surefire entertainment centerpiece seems like a steal. Besides, if all those rave reviews can be believed, NKG provides many ancillary services you might otherwise pay more for.

“We’re not just a band—we’re an entertainment package,” says Kukla. “And though it may seem like a rudimentary thing, we go on on time. For us, getting up onstage and performing the music is the reward.”