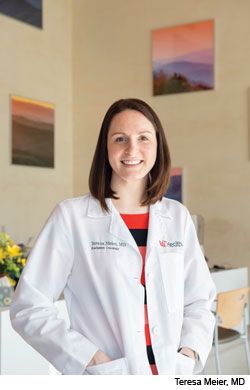 
Both are aimed at improving patient outcomes, but on the one hand, studies continue to examine treatments that further decrease risk of cancer recurrence, she says. On the other, for more favorable breast cancer outcomes, studies are looking into whether traditional therapies can be backed off a bit without sacrificing effectiveness, or if different therapies can be used that don’t have as many side effects.


One such trial in the latter category is set to start at the University of Cincinnati, where Meier is assistant professor in the department of radiation oncology.


When the first patient signs on, she will have met the trial’s requirements: age 50 or older, diagnosed with and surgically treated for an early stage (I or II) breast cancer. The removed tumor will have been no larger than 3 centimeters, and found only in the breast, not in any nodes.


The cancer would also have been estrogen receptor-positive, meaning it was driven by hormones, which deems it a more “favorable” cancer for treating, Meier says.


The study, whose overarching objective is tracking the cosmetic impact of this radiation therapy, first came to mind with the inception of Ohio’s second proton facility.


“The initial idea of this study started three years ago when our proton facility [a joint collaboration between UC Health and Cincinnati Children’s] opened,” Meier says. “I received help and support from Dr. Vinitia Takiar within my department and our head physicist at the proton facility, Anthony Mascia.”


Using proton beams to deliver radiation is desirable because it can target the dosage to the site without spreading damaging radiation to untargeted tissue or nearby organs, Meier says.


Conventional radiation therapy has been delivered via photons, or X-rays, which sweep radiation not only to the intended spots, but also to nearby, unintended spots.


Protons, which are charged particles, are able to focus on and deliver radiation to the specific area targeted—in this case the surgical cavity or bed where small residual tumor cells could grow or lie undetected—without seeping any radiation, or an “exit dose” of radiation, to nearby sites.


“Our biggest hope is that proton therapy would minimize radiation dose going to nearby organs such as the lung, heart, contralateral breast and the remainder of the normal breast tissue on the treated side and thereby minimize long-term side effects related to treatment,” Meier says of the study, which received grant money through the Marlene Harris-Ride Cincinnati.


But while the study may shed light on the nearby skin-, tissue- and organ-sparing value of pencil beam proton therapy, it is primarily meant to show proton therapy’s overall cosmetic effects, Meier says.


“Cosmesis really evaluates how the treated breast looks in comparison to the untreated or unaffected breast,” she says, considering such details as the breast’s contour, shape and coloring at the treatment site.


The patient, physician and nurse will each rate the cosmetic outcomes before, during and after treatment for a period of two years afterward, Meier says.


Unlike traditional photon radiation therapy, which is typically scheduled daily for three to four weeks, this study’s treatment will be administered two times a day for five days at the West Chester facility.


“Side effects for treatment would be relatively similar for partial breast irradiation for proton and photon therapy; they would include mild skin irritation, breast swelling or tenderness, and fatigue,” Meier says.


“We are hoping to enroll our first patient soon on the trial,” she adds. “Unfortunately insurance approval for proton therapy has been our biggest hurdle.”


But this is not the only proton therapy trial going on, she says.


“We also have open at UC a national trial called the RadComp Trial,” she says. “This trial is evaluating the use of proton therapy for locally advanced breast cancer patients who need their regional lymph nodes treated in addition to the breast. Patients on this study are randomized to treatment with either proton therapy or photon therapy.”