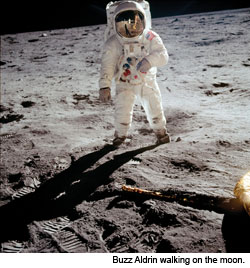 “Destination Moon: The Apollo 11 Mission,” an exhibition that showcases the daring and teamwork behind the first moon landing, takes center stage at the Cincinnati Museum Center
Corinne Minard

Everyone knows the story of the first moon landing. We know that Ohio’s own Neil Armstrong made the first step, that he made that now-famous quote and that the world didn’t seem to be the same afterward. But how much do we really know about the historic trip itself?

“Destination Moon: The Apollo 11 Mission,” a traveling exhibition that will open at the Cincinnati Museum Center Sept. 28, looks to fill in the gaps and provide new details to those who watched the landing live and others who only know of the moon landing as a historic moment.

“[The exhibition] is on the one hand a celebratory look back at the Apollo 11 mission,” says Kathrin Halpren, project director, Smithsonian Institution Traveling Exhibition Service, “and [on the other hand] to spark the imagination of the American public into thinking about what might be in the future.”

The exhibition will first show visitors what was happening in the country and the world at the time of the mission, introduce some of the 400,000 people who worked on the mission and describe the impact of the mission on the space program and the American public in the years following.

“We’re hoping that visitors, even those who weren’t alive 50 years ago when the mission took place, can feel the enormity of what took place during the mission. It was such a huge effort by thousands of people to pull this off; it wasn’t just the three astronauts that landed on the moon,” says Dave Duszynski, vice president of featured experiences for the Cincinnati Museum Center.

“That was the astronauts’ home after the mission and so that’s really exciting to have that here. It’s so rare to be able to have that in Cincinnati,” adds Duszynski.

While the command module is certainly the star of “Destination Moon,” there are many more items in the exhibition that Halpren and Dusynski say are equally fascinating. Visitors will be able to see Michael Collins’ watch (which he had to wear on the outside of his spacesuit), lock boxes for moon samples, star charts, a medical kit, a survival kit in case they splash downed off course and even Buzz Aldrin’s gold-plated extravehicular helmet and gloves.

Halpren advises visitors to take the time to look through the magnifying glass that is set up on the side of one of the gloves as otherwise they’ll miss Aldrin’s moon to-do list.

“You can actually look through that magnifying glass and read all the various lines of instruction. One of them is to photograph the boot print. So that iconic photograph we have of the first boot print on the surface of the moon, we might not have had [it] if somebody hadn’t made sure to include a gentle reminder,” she says.

Another interesting item that visitors may miss is a small piece of plastic and an aluminum pen. The items are on loan from Buzz Aldrin himself and remind us that quick thinking when things go wrong is always appreciated, even in space.

When Aldrin and Armstrong returned to the Lunar Module (LM), they found that piece of plastic on the floor—it was part of the switch to initiate the launch sequence for leaving the moon.

“Although mission control said, ‘We have the engineers working on a workaround, please don’t worry,’ Buzz Aldrin and his fighter-pilot can-do attitude said, ‘You know what? I have an aluminum covered pen here and I can stick that in the switch and lever the switch up into the on position,’” says Halpren. “There’s actually a dent on the side of the pen where the fulcrum of the lever point was.”

After walking through “Destination Moon,” visitors can learn even more about the moon and the Apollo missions thanks to several other exhibits and attractions.

“A New Moon Rises,” a photography exhibit at the end of “Destination Moon,” will feature contemporary photography of the moon’s surface, taken by the Lunar Reconnaissance Orbiter.

“So we have both a historic look and then also a reminder that we are actively exploring the moon, in this case it’s via robotic cameras as opposed to human exploration,” says Halpren.

A new permanent exhibition in the Cincinnati Museum that opened in May will also be open at the same time as “Destination Moon.” The Neil Armonstrong Space Exploration Gallery allows visitors to learn more about Armstrong and his connection to the Cincinnati community.

And in the Omnimax theater, visitors will be able to see a special film called Apollo 11: First Steps Edition.

“This to me is a phenomenal film in that there is no modern overlay trying to describe what happened during the Apollo mission. It’s all archival footage and archival sound, so you’re kind of reliving the moments leading up to the launch and the mission and the mission itself,” says Duszynski.