A Local veteran recounts his experiences during the Korean War. 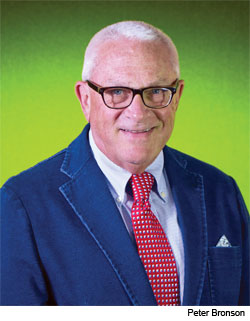 Marine Sgt. Johnny Johnson marched into deadly combat the first day he landed in Korea and it didn’t stop until he was sent home. He fought from the tip of South Korea all the way to the China border. His battles marked the map of war like the tiny flecks of dirt and sand still stuck under his skin from a Chinese grenade.

He landed in 1950—the year of the worst winter in Korea in 100 years, when temperatures in the north plunged to 40 below zero, and tanks, rifles, jeeps and canned rations were frozen by the “Manchurian Wind Tunnel.” Johnson still buys his shoes extra-large and wears two pairs of socks, even in summer, because his bones cannot forget the bitter, grinding cold.

He was among 8,000 1st Division Marines who fought one of the most valiant, historic battles in U.S. military history at the Chosin Reservoir. They were outnumbered by 100,000 Chinese who came out of the mountains and “poured over the hills like water,” he says.

The Marines scraped and clawed out shallow foxholes, reinforced by stacks of enemy dead. Morphine Syrettes froze solid and had to be thawed in the mouths of medics as men suffered and bled to death. The Marines fought their way out, taking their wounded and dead draped on Jeeps like bucks in deer season.

Before Sgt. Johnson was part of the legendary “Frozen Chosin,” he landed at the tip of South Korea in the darkest days of the war. Gen. Douglas MacArthur recklessly underestimated the North Korean invasion and sent only a token force that was nearly annihilated as it clung to the shrinking Pusan Perimeter on the toe of the peninsula. The Marines came to the rescue, got off their troop ship, stuffed their pockets with grenades and ammo, and charged into battle. “When we pulled into the wharf, we could see the flash of the big guns. It was all around us.”

As they rushed to the front, they passed Army troops hurrying the other way. “We were eager for a fight,” says Johnson, now 86. “We were trained for it. We’d be walking up the sides of a road and these Army guys would be running the other way crying, ‘You will all be killed, there’s tanks up there.’ We felt really bad for them. Evidently, their officers weren’t leading them.”

Reinforcing the Army, the Marines routed the North Koreans.

Then Johnson’s battle-tested division was selected for MacArthur’s risky and brilliant landing at Inchon, halfway up Korea’s western coast. They climbed a sea wall under withering fire, outflanked the North

MacArthur scoffed at threats by China and assured his troops they would be home by Christmas. It was a fatal mistake. The Chinese attacked on Nov. 25. The surrounded Marines would have been massacred as the 8th Army was in a nearby mountain pass called “The Gauntlet,” if not for Medal of Honor winner Capt. William Barber, who led 233 Marines to secure Toktong Pass.

At Chosin Reservoir, the Marines had 561 killed, 182 missing, 2,894 wounded and 3,600 disabled by non-battle injuries, nearly all frostbite. The Chinese lost 45,000, more than half killed by cold and starvation.

A few years ago, Johnson, raised in Harlan County, Ky., was asked to dedicate a statue of Barber in Barber’s hometown of West Liberty, Ky. They grew up just miles apart in coal country, separated by the Daniel Boone National Forest.

“The politicians there all had somethin’ to say,” he drawled. “It went on and on. But when the ‘Star-Spangled Banner’ played and I finally tugged the silk cover off the statue… man, that was one of the proudest things I did in my life.”

Chosin Reservoir, Toktong Pass, Inchon—all are mostly forgotten now. South Korea still sends flowers to the Korean War Memorial in Washington, D.C. They know the price of freedom. So should we. Sgt.Johnson’s fingers and toes remind him every morning.

Sgt. Johnny Johnson and dozens of veterans of World War II, Korea, Vietnam and Iraq tell their thrilling and heartbreaking stories of combat in Legacy of Courage II, the second book in a series by Honor Flight Tri-State. Book sales send more veterans to visit their memorials while they still have the chance.