The Cincinnati Zoo provides a model for businesses throughout the country.

In early June President Trump decided to pull the United States out of the Paris Environmental Accords. At the same time, EPA Secretary Scott Pruitt has moved to cripple the agency’s support for renewable energy.

In face of these developments, Michael Bloomberg, business leader, philanthropist and former New York City mayor, pushed back. Bloomberg pointed out that “emission levels are determined far more by cities, states and businesses than they are by the federal government.” Bloomberg and other philanthropists pledged $15 million to the UN to help it implement the Paris agreements, while dozens of governors and mayors pledged to stick to its guidelines and business leaders as diverse as Jeffry Immelt of GE and Elon Musk of Tesla pledged to continue their environmental programs.

In the last 25 years, engineers, architects, designers and urban planners have embraced sustainable practices and, in the process, have come to understand that sustainability makes good business sense. Alejandro Aravena, the Chilean architect who won the prestigious 2016 Pritzger Prize for architecture, succinctly expressed that viewpoint: “Sustainability is nothing but the rigorous use of common sense.”

One of the best places locally to see that common-sense business approach to environmental practice is at the Cincinnati Zoo. Fiona and her friends are the stars who draw 1.6 million visitors a year, but behind the scenes our zoo has become a model for every organization.

Eleven years ago, when Thane Maynard and David Jenike assumed the role of CEO and COO respectively, the zoo was bleeding red financially, had no green team and no sustainability plan. But “inherent in the zoo’s DNA,” says Jenike, was a recognition that the conservation of resources is fundamentally compatible with its mission.

Although Jenike did not realize it at the time, hiring Mark Fisher in 2006 as director of facilities put the zoo on a new course. Trained as an engineer, Fisher had experience with Turner Construction and had worked on some zoo projects.

Within weeks Fisher received his first water bill for $70,000. After determining it was a monthly, not a quarterly bill, Fisher began asking questions, because this was “crazy.” He found out that the zoo was the largest water user in the city at 20 million gallons a month.

Besides fixing dripping faucets, hoses and pipes, one day Fisher questioned a trickle of water in the old Cat Canyon built by the WPA in the 1930s. Facilities personnel and long-time animal keepers assured him it was a natural spring. 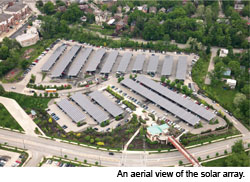 Suspicious, Fisher ordered the crew to dig. What they found was a 4-inch water main that had sheered probably 30 years earlier and was pouring water straight into a sewer 24/7, 365 days a year.

Fisher and his crew took the same approach to electricity. “If there was water or juice running through it, we asked, ‘How do we do that better?’”

Between 2006 and 2016, the zoo has saved over $11 million in utility costs. As important as those savings were, the real turn around came when Fisher asked for permission to plow those savings back into the zoo’s infrastructure. When Maynard, Jenike and the board supported that request, Fisher and the zoo switched from a reactive to proactive mode.

They formed a partnership with Melink Corporation of Milford to build the largest urban solar array in the United States over the new Vine Street parking lot. Over the past seven years it has exceeded the original estimate that it would generate 25 percent of the zoo’s electricity.

That was followed by the construction of the Schott Education Center, the zoo’s first LEED building and a commitment to meet or exceed LEED standards in every future structure.

In 2012, the zoo completed the transformation of an old parking lot into the new Africa exhibit. The design allows visitors to get close to the cheetahs, lions and painted dogs, not to mention Fiona and the other hippos. But what is really amazing is what you don’t see.

Buried beneath the savannahs of “Africa” lies a cutting-edge storm water management system that allows the zoo to capture and purify million gallons of storm water. The proposed system had never been tried anywhere and violated regulations against reusing “gray water.” It took three years of negotiations with MSD, EPA and the US Geological Survey, but today recycled water fills the hippo, polar bear and sea lion pools (as well as other exhibits) and keeps 15 million gallons of water out of the county sewer system.

Over the last 11 years, Mark Fisher, one of the least jargoned change agents I have ever met, succeeded because he was willing to challenge accepted practice and ask tough questions.

More importantly, the zoo embraced an “ethic of sustainability” because the leadership was willing to take risks. “Failure is a part of every business,” observes Jenike. “If you don’t accept failure you are not going to succeed.” In 2017 innovation, progressive thought and challenging the status quo are simply a “part of the secret sauce that makes the whole thing work.”