Locals schools are creating programs that are preparing students for the future.

Chamberlain Middle School is out of this world—seriously.

Each year, Chamberlain chooses one student to attend Air Camp, made possible by the Robert E. Callahan Scholarship provided through Phil and Sherry Callahan, a local Carlisle family.

Air Camp, launched in 2010, is an educational camp for elementary students, middle school students and teachers. Its purpose is for campers to “learn more about science, technology, engineering and mathematics (STEM) using aviation and aerospace as [the] medium while promoting the values of scholarship, leadership and citizenship,” according to the Air Camp website.

This year marks the third time a CMS student will be able to go to Air Camp at the Wright-Patterson Air Force Base in Dayton thanks to the scholarship. This year’s recipient is eighth-grader Hailey Saylor.

Saylor was selected from a pool of applicants. In order to determine the lucky recipient, applications are based on a point system, with points earned by applicants’ grades, state scores in math and English language arts tests and a teacher recommendation.

At Air Camp this summer, Saylor will spend a week furthering her passion and knowledge of aviation, and the STEM behind aeronautics.

“All of [the scholarship recipients] say that Air Camp is one of the highlights of their educational experiences,” says Phil Callahan. “It’s great to be able to see that.”

The Callahans have always been involved with the Carlisle community. Phil and his father, Robert, whom the scholarship is named after, both graduated from Carlisle, as did most of the family, according to Phil. The scholarship has existed since 1983, but this is only the third year it’s been going towards a young student to go to Air Camp.

“We decided that we would probably have a bigger impact on a student by sending them to Air Camp more so than just handing a graduating senior a thousand bucks, which we used to do,” Phil says. “That money probably wouldn’t even cover the cost of books for a college kid. We knew if we really wanted to have an impact on a kid, then we needed to take a young 12- or 13-year-old to Air Camp.”

Phil says that the decision for the scholarship to send someone to Air Camp, rather than another program, was easy to make.

“Dad was in the Air Force, my brother works at General Electric, so it seemed like a natural fit,” Phil says. “Plus, just the whole idea of promoting STEM subjects was good—getting kids interested at an early age. Plenty of job opportunities are available in the STEM field, but not many schools have this program. So we are doing our little part to inspire kids.”

“This opportunity brings a hands-on approach to all students,” Turner says. “All the students that’ve gone to Air Camp have really shown interest in the STEM concepts they learned. They’ve seemed career-driven in this area.”

And the out-of-this-world inspiration won’t stop soon—Phil says they intend to keep the scholarship going as long as possible.

Fairfield City Schools is on the forefront of equal representation in the region. According to the Fairfield City School Diversity Plan for 2016 through 2018, the mission is, “teaching our children, and ourselves, to live, learn and work together in a vibrant and diverse world.”

Keena Westmoreland, a third-grade math, science and social studies teacher at Fairfield West Elementary and member of the Minority Recruitment and Retention Committee, says, “They have been striving to make sure there is an 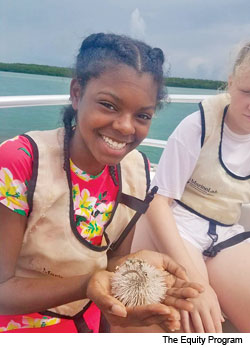 equal representation of minorities in our district.” After being on the committee for three years, he says “I’ve definitely seen an increase in minority students. Being an African-American male, I’ve stayed in the district and I love the district.”

Lani Wildow, director of curriculum and instruction and member of the Equity Leadership Team, says, “We examine student data on a regular basis to ensure we are meeting the needs of each student. We choose materials, which represent all students, and we are learning how to personalize the learning experience better every day.”

The Equity Program hosts many activities to celebrate diversity. Each year the program hosts a Multi-Cultural Night in which families from various places and backgrounds bring food for everyone to share and represent their culture and experience. People from all over the district attend.

The Equity Program still has many more goals it would like to reach in the future. Westmoreland says, “I would like to see more minority representation in the staff. I know we’ve been taking good steps in having that.” He also wants each school building within the district to be able to accommodate diverse students.

“From my position, I would like to see us win the battle with the achievement gap,” Wildow says. “In the future, I would like to be able to say that we have taught in such a way that all of our students, no matter which student group they represent, have reached their maximum potential.” 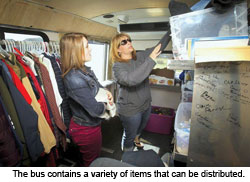 “Eighty five percent of our students do service. We do not require service, we want it to be voluntary so that it’s an internal motivation that they carry through the rest of their lives,” says Gloeckler.

For the third year in a row, St. Xavier High School students and many other volunteers of The Broken Bus Ministry have provided items like shoes, clothes, food, hygiene products and much more to those in need. The Broken Bus Ministry goes above and beyond to continue to give back, from holding birthday parties for the homeless to even providing animal food and care to those who own pets.

“Every week we try to provide a hot meal. We usually serve about 40-60 people a week, it just depends on the weather. We find it’s really important to always provide dessert because everyone loves dessert and has a sweet tooth,” says Michele Bailes creator of The Broken Bus Ministry.

The Broken Bus Ministry continues to make an impact not only within local communities but on St. Xavier students as well, who have learned that simply something to eat, a smile and conversation can make a big difference.

“The Broken Bus Ministry has not only impacted us. I think we’ve impacted them as well,” says Gloeckler.