Visitors to MetroParks of Butler County’s website will see a new look along with a new outdoor game this summer.

Kelly Barkley, senior manager of community relations, says the park district will launch a new logo and a new website design. “Our new website will contain lots of visual elements, photos and videos,” she says.

The new website, yourmetroparks.net, is much more intuitive for users and will make accessing the various categories much easier and with fewer clicks, says Barkley. “It is also easy to use whether it is accessed on a tablet, laptop, desktop or mobile device,” she says.

Once on the website viewers will see the MetroParks of Butler County’s new logo. Designed in the shape of a leaf the new logo uses “fun” colors of green, blue, white and orange, she says. “MetroParks decided that it was time to ‘freshen up’ our logo so that the image better mirrored the services that MetroParks delivers to our park customer/owners,” Barkley says. “The leaf itself represents the opportunity to connect with nature itself.”

The four colored areas of the leaf symbolize the various aspects of what the park district does as a land-management conservation agency, says Barkley. “The blue and green sections represent the land and water we manage and preserve,” she says. The orange section, which appears to represent a roofline of buildings, shows how important each community is that the park district serves across the region, says Barkley. The white path through the leaf represents trails and connections, she says. “It can be the Great Miami river way, stream corridors, paved paths or natural trails,” Barkley says. “They are all essential to making the connection to nature.”

Connecting with nature is the goal of a new outdoor board game called 50 Fun Things. The game, which takes place between April 8 and Aug. 31, is a guide of 50 suggested fun activities for families and children to do at MetroParks of Butler County, says Debby Stewart, supervisor of Park Connections.

Participants can go to the park district’s website and under the calendar of events open the 50 Fun Things PDF, print it out and take it to a local MetroPark of Butler County. Once an activity has been completed participants can color the square in with a crayon, marker or pen.

Some of the activities include “identify (and hug) a tree,” “catch raindrops on your tongue,” “howl at the morning moon,” “take a hike,” “go camping,” “catch a fish,” “visit a log cabin,” “make a mud pie” and “have fun on the farm.” 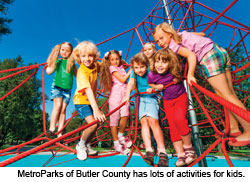 Participants can also share their experiences on social media by tagging their posts with #MPX50FunThings. Posts can be shared on Facebook at facebook.com/metroparks, on Twitter at @YourMetroParks, on Instagram at metroparks_butlercounty, or by email at info@YourMetroParks.net.

To be eligible for prizes the 50 Fun Things game board must be completed and turned in by Aug. 31. The grand-prize winner will be drawn and announced on Sept. 1.

Stewart says the Park Connections staff at MetroParks of Butler County created the game to help people recognize and think about all the fun things that people can do in the parks.

“The game encourages time spent outdoors, in nature and in multiple parks,” says Stewart. “The game is a sort of trail guide to lead people toward different parks. It is also meant to be something that families can do together, not necessarily all at one time, but over a series of visits.” 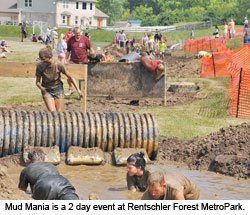 The first 1,000 people will receive an identical prize—a collapsible flying disc, says Stewart. “All individuals who qualify by completing their game board will be entered into a grand-prize drawing,” she says. “We will use a random selection system to choose the winner. The grand prize will be revealed on social media over the course of the game period.”

A new website, logo and outdoor game are not the only new things that park visitors will see this year at MetroParks of Butler County. Barkley says an extensive list of enhancements is planned for many of the parks—all driven by the Master Concept Plans.

This year the projects that will be most visible include those at Voice of America MetroPark where a field house will be constructed at the park’s athletic complex, additional paving will be added around the athletic complex and way-finding signage will be installed.

Work at Chrisholm MetroPark this year includes the construction of a nature playscape and the addition of farm animals at Chrisholm Historic Farmstead.

Projects at Rentschler Forest MetroPark in 2017 include the addition of four playing fields, parking and a future shelter at Line Hill Area, and the extension of the trail.