For Sgt. Bob Abrams, diving with sharks is no big deal after riding helicopters into battle.

Scuba Santa swims with the sharks at the Newport Aquarium each December, wearing a red coat, a fuzzy Kris Kringle hat and a long beard that swirls around his mask and mouthpiece like white seaweed. He waves to the kids and keeps a wary eye out for the bully of Shark Central—a 220-pound loggerhead sea turtle that likes to bite holes in air hoses and divers.

“The sharks are no issue,” says Bob Abrams.

Nearly 50 years ago, he was keeping a wary eye out for predators of another species in the jungles of Vietnam.

In 1969 he was Sgt. Abrams in the elite 1st Air Cavalry—one of the “horse soldiers” who rode helicopters into battle. His story is featured in Legacy of Courage II: More Stories of Honor Flight Veterans. He led his “Rat Patrol” squad into battle aboard “Huey” gunships, carrying an M79 “bloop tube” grenade launcher with his M16 rifle.

“The VC (Vietcong) were like the terrorists of today; you couldn’t tell the bad guys from the good guys. They would pop out of a spider hole and take out three or four of our guys and run away.”

He will never forget Sept. 14, 1969. “We had one firefight that I think about every day. We were operating out of a firebase in Song Be. We were on gun-jeeps, clearing a road with about 60 guys, when we ran into a battalion of NVA. It was an ambush. They took out about 30 of our guys, killed or wounded right away. The good news was that we had all kinds of extra ammo on those gun-jeeps, so that helped out.

“We dove into a ditch. The medic next to me yelled, ‘I’ve been shot.’ I looked at his wound and I saw that the bullet had gone 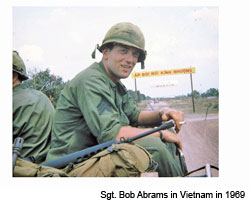 through his shoulder and exited from his back. I told him, ‘Hey, Doc, it doesn’t look too bad.’ He walked me through what to do and I patched him up. And he went right off to care for the wounded. He was one of the bravest guys I ever saw. He was unarmed because he served as a Conscientious Objector.”

“It was just a tremendous act of bravery,” Abrams says of the medic. “When it was all over, he was awarded a Silver Star.”

And then there was Abrams’ friend, Sgt. Donald Skidgel. “We were pinned down really heavy, and he came down the road in an open gun-jeep with an M60 machine gun and just sprayed both sides of the road and took out a lot of NVA. Then he was shot right between the eyes and went down.” Sgt. Skidgel was awarded the Medal of Honor. 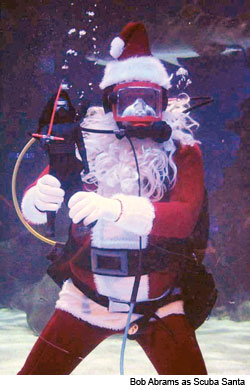 “I had an M79 grenade launcher and I fired 200 rounds that day,” Abrams remembers. “I just thought we were done. … I don’t know how to describe it, but I got this calming feeling that came over me. That it was over. We were done. I was not afraid. Just calm. Then on my radio, the 11th Armored Cav, with 32 armored personnel carriers, called and said, ‘We’re five minutes out.’ I radioed back, ‘I don’t think we’ve got five minutes.’ Fortunately they did make it in time.”

Like most veterans, Abrams doesn’t talk about his service. He prefers to speak with actions—by volunteering to help disabled veterans and supporting the Honor Flight Tri-State mission to make sure all veterans visit their memorials in Washington while they are still able.

He scoffs at being a hero the way Scuba Santa scoffs at diving with sharks. “I’d like it all to be about the other guys who did not come home,” he says. “About their bravery. Those are the real heroes.”