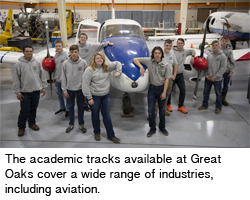 Great Oaks’ programs for both adult learners and high school students open up doors to greater successKevin Michell Harry Snyder, president and CEO of Great Oaks Career Campuses, recalls meeting with a local rotary club recently where 10 of the 25 visiting members were surprised by what the career and technical education institution was doing. Despite knowing of its existence, they were unaware of how Great Oaks is guiding career development in both teenagers and adults through programs and certifications in an array of industries.

“We’ve been at that forefront for 50 years,” Snyder says with a laugh.

It’s true—Great Oaks was founded in 1970 when 22 school districts partnered to become the Hamilton County Joint Vocational School District and, ever since, the organization has provided educational tracks designed to prepare the workforce of the future.

Today, the school has four main campuses for adult and high school learners, partnerships with 36 school districts and career exploration programs in which around 18,000 high school and middle school students participate.

One of the great drivers of Great Oaks’ success is the speed with which it embraces the emerging technology and skills that employers will need from workers.

In the early 1980s, Great Oaks purchased 100 personal computers directly from IBM, which led to the computer manufacturer’s leadership visiting Cincinnati because a school making such a purchase was relatively unheard of at the time. Great Oaks split those computers among four large Airstream vans and shuttled the computers around to its satellite schools, parking them for students to learn how to use.

Today, that integration of new technology in Great Oaks’ classrooms and workshops takes many forms, from utilizing drones in its Fire and Emergency Medical Rescue Academy to the use of robotics in its CNC manufacturing program.

“It’s interesting to look over our 50-year history and see the program changes and/or how they have adapted,” says Snyder. “Precision machining’s a good example—we still use the same milling machines, but the information is put in differently. It’s now using a computer numerical control (CNC) system. [The work] evolved and we’ve had to evolve our machinery to do likewise.”

Creating a workforce development curriculum that always has one eye on the future has allowed Great Oaks Career Campuses to persist, grow and evolve over its 50 years while also solidifying its importance to local and regional industries, as well as the economy on the whole.

A couple of years ago the school system faced a series of crucial moments. In fall 2017, the University of Cincinnati Economics Center released its study on the wider economic impact of a Great Oaks education, both in terms of a student’s return on investment and the local economies that graduates left Great Oaks to work in.

Among its findings were that adult learners who earned a certification through Great Oaks earned between $8,000 and $27,000 more than workers with only a high school diploma or equivalent experience in just their first year after leaving Great Oaks, a positive return for their tuition expenses that compounded further five to 20 years down the road. The study also found that Great Oaks operations alone resulted in nearly $115 million in local economic impact, not counting the wider effect that its students and their enhanced incomes had on their respective municipalities.

Snyder says this study, which used adult student information and data from the Ohio Department of Job and Family services to track the career paths and earnings of those who earned certification through Great Oaks, really answered the question of what impact the school was making.

“That data then showed us that we’re not just making this up,” he says. “These are our students, this is what’s happening with people who have taken our HVAC program, our police academy program, our part-time programs.”

Having this concrete data to show helped the school pass its levy renewal in November 2018 and continue to forge partnerships with businesses and municipalities—and the leaders steering them.

“It helped us have that conversation,” says Snyder, “helping them understand that we’re not just a place where kids are sent to learn skills, but we also contribute back to those communities that we serve and there’s an economic impact on that.”

And while having industry-specific advisers and partners for Great Oaks’ programs goes a long way to helping the school adapt its offerings for the workforce of the next decade or two, the focus is still and always on the students who utilize its classes and the successes they achieve.

While many of the adult and high school learners who enroll in Great Oaks go on to have great careers because of the education they receive at its campuses, around 30% of the high school students that take Great Oaks courses continue on to traditional four-year college. In February, MacKenzie Kay of McClain High School in Greenfield, who has taken medical assistant classes at Laurel Oaks, was awarded the Wilfred R. Konneker Cutler Scholarship, a full four-year free ride to Ohio University.

In that way, Great Oaks holds a special appeal to middle school and high school students, as well as their parents. Taking courses at one of its campuses allows students to explore multiple potential career paths through exposure to different career skills before they have left secondary education. As Snyder says, taking classes at Great Oaks multiplies a student’s potential pathways and lets them learn not only career-relevant skills but also applications for their passions they might not have known of beforehand.

“I always like to say that our high school students are risk-takers,” he adds, “and that they step away from the comforts of their home school to try something that’s different, that fits their excitement and their dreams and then they pursue them.”

And with the support of Cincinnati’s communities and industries, Great Oaks will continue to reward the risk-takers—both those still in high school and the adults who come to Great Oaks campuses for career advancement—by offering many paths to fulfilling their potential.