Newport Aquarium’s Stingray Hideaway gets visitors up close and personal with stingrays.

Stingray Hideaway may be somewhat of a misnomer. While Newport Aquarium’s newest attraction does feature plenty of playful stingrays in its 6,000-square-foot exhibit, they aren’t exactly hiding. They reside in a touch pool around which guests can gather at the water’s edge to watch the stingrays glide through the water.

A 30-foot-long tunnel leads children and adults who don’t mind crouching through an open-sided and open-ceilinged view of the pool, offering up-close glimpses of the salt-water swimmers from every angle. A small enclosure in the middle of the tunnel allows room to stand up in the middle of the touch pool amongst the stingrays themselves.

“The tunnel gives people the full experience of seeing the stingrays and feeling like you are in their underwater habitat,” says Jennifer Tan, public relations manager at the aquarium. “When they’re swimming above you, it looks like they’re constantly smiling at you.”

These smiles are shared among the exhibit’s three species of stingray: yellow, southern and cownose. And yes, cownose really is their name, derived from their wide, notched faces resembling a cow’s nose. The cownose stingrays have a wingspan of up to three feet, making them the middle-sized stingrays in the exhibit, although the smallest animal in the touch pool currently is a baby cownose stingray named Finn. He’s the only male, joining a host of female stingrays including Miss Piggy and Jabba-Ann, all named by Biologist II Michelle Fry. 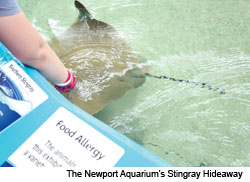 The 17,000-gallon touch pool allows visitors to pet the stingrays, if they wish, using the aquarium’s standard petting procedure: two fingers, gently, away from their eyes. Fry says they actually love swimming up to people, but it might not have to do with their great petting technique. “We feed them by hand,” she says, “so they see hands and think they’re getting some shrimp.”

But don’t worry about disappointing them with shrimp-less hands. The biologists have been getting the stingrays acclimated to the touch pool so that they feel as comfortable as possible. No stingray comes up for a pet unless that’s what she wants. 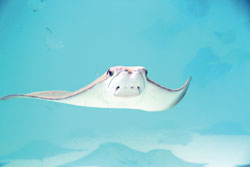 Signs posted throughout the exhibit teach visitors more about the stingrays and about the central message of the aquarium as a whole: conservation. “There’s a continuous water message letting people know about the different waters of the world,” Tan says. “When people have the opportunity to get up close to an animal and build that relationship with an animal, it really helps them build that lifelong respect for these animals.”