Ursuline Academy steps up its game with a new scheduling app for students.

Ursuline Academy recently got an upgrade with a student-designed app. Sara Rani Reddy, a 2017 graduate of the all-girls school, developed the app after her sister, Marisa, began a prototype several years ago. When Marisa became too busy, Sara picked the project up and, with the help of her uncle and several teachers at school, finished the Ursuline Merici Schedule App in August 2016.

She says she saw a need, since Ursuline Academy operates on a modular schedule. “It’s so much easier to see what’s coming up,” she says. And her peers agreed. Reddy says she received plenty of high-fives after the school year got underway. “It was so cool!” she says. “And I met so many people because of this that I wouldn’t have normally.”

Ursuline’s schedule is designed to give students more flexibility in their classes and prepare them for a college schedule. The class schedule is broken down into a cycle of six days, 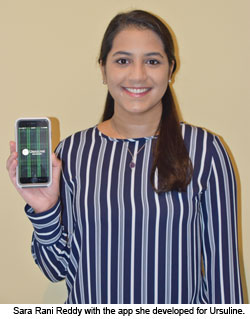 labeled A through F—meaning that if “A” day and Monday coincide, the next “A” day is the following Tuesday. The classes last either two or three “mods,” or modular units, each consisting of 22-23 minutes. An entire school day is 18 mods. While this schedule means the students have plenty of opportunities to customize their schedules, it can also get confusing.

Ursuline Academy President Sharon Redmond says the app has already been tremendously useful since launching last year. Students typically printed their schedules out and color-coded them, but now they can check with just a tap on their phones. “Sara Rani Reddy did a great job with the app,” she says. “It’s even useful as a parent. If they need to make an appointment they can pull up the schedule and see when they have free time.”

And Reddy designed the app with more than just scheduling in mind. “Having the planner and schedule on paper, I wanted to know what homework I had, what important activities were coming up, when I had meetings or tutoring,” she says. “That’s where the other features of the app come in, so we have reminders and important dates. It’s kind of like a one-stop shop for students. “

After graduation, Reddy handed over the ownership and management of the app to the school. “I spoke to my parents about this. We always wanted to give it to the school. I’m the youngest of three girls in my family, and since I was graduating we wanted it to be a gift,” she says.

Reddy will start at the University of Notre Dame this fall as a chemistry major, but she says she still wants to work with technology. As a Stamps Scholar, Reddy plans to develop a way to allow college graduates in the program to keep in touch. “I’m going to see if there are things I can make better with apps,” she says. “My goal is to use technology to improve whatever I’m working on.”