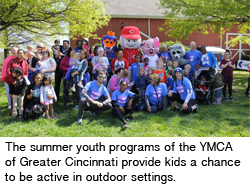 Programs at the YMCA of Greater Cincinnati encourage physical, mental and intellectual growth in children of all agesKevin Michell The arrival of spring promises many days ahead for families to get outside and enjoy the warmer months. But as Jorge Perez, president and CEO of the YMCA of Greater Cincinnati, points out, it’s a crucial time for children and teens to continue their growth, even outside of their classrooms.

It’s important for them to avoid the “summer slide,” he says, which is how some students lose the knowledge they’ve gained from the previous school year during summer break. Based on how they spend the months in between academic years, some kids can lose ground—as much as three or four months’ worth of learning—if they aren’t getting opportunities to apply what they’ve learned in the summertime.

“The research is real clear when it comes to outdoor space and youth development,” says Perez, who mentions a speaker he recently saw giving a talk on promoting good mental health in children. At the top of the list of best things to encourage a child’s mental growth: be outside.

Perez has a personal example that immediately made that point resonate with him.

“I remember going waterskiing during a summer camp and being on those skis, wondering what was keeping me up,” he recalls. “Why was I, when I’m not moving, falling into the water but when I am moving with the right gear, I can be on top of the water—and wondering whether friction had something to do with it.

“Well that wouldn’t have happened if I wasn’t on those skis, if I hadn’t had those adventures, if I just spent all my time watching old episodes of I Love Lucy,” Perez adds with a laugh.

That room to dream, imagine and explore is necessary to supplementing the academic development that takes place in the classroom and gets to the heart of the YMCA of Greater Cincinnati’s summer and year-round programming.

While the focus of summer is often on sports, swimming classes and camps that encourage healthy activity and physical well-being, there are several great YMCA programs focused on other aspects of youth development that are every bit as important.

Perez likens the holistic view of youth development to something a lot of us experienced in early elementary school: receiving a bean in a cup in order to have it sprout when given the crucial ingredients of sunlight, water and soil. He says it’s much the same for human beings—give kids opportunities of social/emotional, cognitive and physical development and they have the right ingredients for growing into healthy adults.

The programs of the YMCA of Greater Cincinnati serve to add any of those factors that are lacking in a child or teen’s life.

“We also learn in that lesson that you can’t skimp on any of the ingredients,” Perez explains. “Again, human beings are the same way: You can’t have a great academic experience and great physical support—great food and exercise—but not teach these young people how to develop positive relationships and expect that ‘bean’ not to struggle.”

One of the programs that helps fill in the gaps is the YMCA Achievers program, which is for teenagers who will be the first in their families to attend college. YMCA Achievers offers college and career preparation to make that opportunity count and help them avoid being one of the 35-40% of students who drop out during or after the first semester at college.

The program received recognition from Hello Insight late last year through its HI Impact Award, which was given to only 17 youth development organizations around the country for demonstrating strong programs and opportunities for young people. The YMCA Achievers program runs parallel to the school year, starting in September and running through April, with several college campus visits and career opportunity sessions with area companies happening monthly in between.

The YMCA also offers a unique program for teens interested in participating in government or thinking about running for office someday. The Youth and Government program serves as an introduction to government involvement at various levels, where participants work with local teachers to form clubs that meet after school. Those clubs hold mock committee meetings to draft, debate and vote on bills, meet with elected leaders and convene with groups from other states or regions to caucus together. Teens involved with the program also hold office in their respective chapters and states, having positions like mayor of their local delegation or being a part of the congressional body in their state’s youth assembly.

“We love to say in youth development work that we want to help kids achieve, relate and belong,” says Perez. “The achievement part of it might be academic, but it also may be helping young people develop a voice that they can use.”

With the array of programs that the YMCA offers young people, there is always a need for adult mentors and leaders to help organize events and clubs. Perez says that it’s not necessarily about having special skills or professional qualifications—all an adult mentor needs is to love kids and want to support the next generation by applying their own passions to the YMCA’s programming. That can take the form of coaching a sports team, reading to very young children or helping to lead one of the development programs like those described above. The YMCA’s adult mentors help children of all ages by meeting them where they are and providing development opportunities that will stay with them for life.

“That’s what we try to concentrate on: creating environments,” Perez explains, “whether it’s after school or summer camps or youth sports or swim lessons—where we’re at least asking ourselves, ‘Are we creating, for that child, an environment that is supportive?’ For kids that live in low-income communities, we’re going one step further and saying, ‘How do we help them even in spaces that are not ours?’”