Empower MediaMarketing is moving from Mt. Adams to Over-the-Rhine.

Yet Empower MediaMarketing’s pending move from its longtime home office in Mt. Adams to Over-the-Rhine is conjuring visions of American pioneers heading west for Jim Price, the company’s president and CEO.

That’s because the independent media agency specializing in digital marketing communications and word-of-mouth marketing will soon move into a four-story, 65,000-square-foot building now under construction at 11 E. 14th St.

Price says the company looked at a lot of Class A office space in downtown Cincinnati’s central business district and couldn’t find anything to fit its needs. So when company officials found a plot of land that was available to construct a building from the ground up in the central business district it was an opportunity the company couldn’t pass up.

“We really wanted to make a lasting impression on the city of Cincinnati and the community by building something from the ground up,” Price says. “It allows us to be a pioneer in an area that was really ripe for a business like ours and a business the size of ours,” he says.

The new building actually incorporates part of an historic building, Price says. Empower MediaMarketing’s new building has used part of the shell of the building that once housed the Hukon Manufacturing Co., he says.

“We’ve refurbished it and [kept] the shell and it’s going to be a really interesting space that we’re going to turn the bottom level into a kitchen and a workout facility and then some conference rooms on top and that will be attached to an entirely new structure,” says Price. 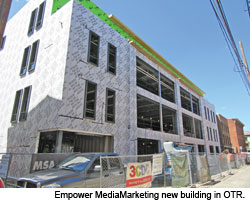 Empower will occupy the bottom three floors of the new space—that will include an open floor plan—and then lease the top floor, he says. The company and most of its 165 employees are expected to move into the new space in September, says Price.

Although he’s a little sad to leave the Mt. Adams building where the company has been located for 13 years, he’s thrilled to relocate the company in Over-the-Rhine. “We’re eager to get down in a little bit more of a vibrant … business community which is growing and the creative class is infiltrating that area,” Price says. “So we’re excited.”

That creative class will be needed to help fulfill the vision of what Price says is the future of Empower MediaMarketing. That vision is to redefine what it means to be a media agency, he says.

That means creating new levels of service for clients, new channels, new ideas for clients to explore, more data-driven thinking and being able to merge media and messages together, says Price.

But don’t more channels to push out a company’s message make Empower MediaMarketing’s job harder? “It not only makes it harder but it makes it more exciting actually,” he says.

“Now we say everything is media,” says Price. “From the bar codes you experience to the email that you got after you bought [a product], all of this media … has to be paired and personalized and working in cohesive fashion to really drive home results.”