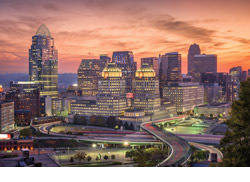 The Cincinnati USA Regional Chamber is working to move the transportation needleGregory Sharpless How does the Tristate not only ensure its current workforce remains in the area, but also attracts more workers to the region?

There are many ways, of course, but here’s a factor that is all too often taken for granted: good transportation options.

Consider: Without viable transportation options, a company’s potential employees never find their way to the best jobs. Without the ability to get to work, current employees are soon replaced. And one of the first things job seekers do in scoping out new areas to relocate to is to evaluate their options for getting to and from work (and around town in general).

The Cincinnati USA Regional Chamber, however, has placed transportation high on its priority list and is working toward the launch of a regional transportation initiative in early 2018.

First, some background is in order. The chamber’s three core focus areas or pillars are:

– Harnessing the power of the region’s unique assets aka cheerleading the wonderful stuff in the region and creating events like Blink;

– Expanding and diversifying the region’s talent base; and

– Having a bold voice for business, which includes not only introducing legislation and government-affairs work but also the chamber’s work on infrastructure and transportation.

“Why do Blink, for instance?” asks Jordan Vogel, vice president of Talent Initiatives. The answer, he says, is “talent, talent, talent. If we can do cool things like that, we keep the talent we have, and we attract new talent to the region. Arts and culture, breweries, parks, etc.—all of this is to attract talent to our region.”

When it comes to talent, says Vogel, the chamber has three focus areas.

“One, we attract new net talent to the region—especially areas such as Chicago, Atlanta, Louisville, New York, areas where there’s already a migratory pattern in place. And we work to strengthen those—we expose our chamber members to best practices such as ensuring that shift hours line up with transportation options. We provide educational programming.

“Two, we look to retain talent via development, enabling workers to improve their leadership skills. We widen the network of people who work in our programs. We want to make sure they stay in the region.

“Third is deepening ties to our community, getting this place ‘stickier,’ getting them tied into causes and not-for-profits etc., putting more ‘tentacles’ around them.”

“Nothing can happen, though, until we can get people to work,” says Vogel.

When you think of a region’s transportation factors, says Peter Metz, the chamber’s transportation and coalition policy manager, the first things that come to mind are typically government-affairs work, tax dollars, the public-transportation system and so on.

But, he points out, there’s also the impact that transportation has on the private sector as well.

“An employer might be saying, ‘I have 20 open positions, why don’t we have the workforce?’

“Well, it might be a combination of factors at work—location of the job versus where people live, perhaps the bus doesn’t turn during third shift, maybe the company is competing with companies in Indianapolis, Chicago or New York, and so on.

Last spring, as part of the chamber’s transportation initiative, the chamber undertook an eight-county poll focused on regional transportation issues. The poll results, announced last summer, comprised the opinions of 800 voters and reflected data weighted to reflect the true geographic distribution of the region’s voters. Here’s just a sampling of the poll results:

– Top five priorities when it comes to regional transportation projects: Ensuring that bus services are available to seniors and people with disabilities; starting construction on the Brent Spence Bridge project; repairing deteriorating streets/roads; expanding the availability of transit services for seniors/people with disabilities; and, expanding bus service to areas where new jobs are.

– 64 percent of respondents indicated that deteriorating infrastructure was “extremely serious” or a “very serious” challenge to the region, topped only by the cost of health care and childhood poverty, and tied with government waste/mismanagement.

– About two-thirds of respondents see a benefit to public transportation—and feel that the region’s current transportation is outdated.

– The biggest barriers to using public transportation, respondents indicated, are: stops too far from home/destination (61 percent); takes too long (57 percent); doesn’t come often enough (52 percent); can’t count on it to be on time (48 percent); don’t like riding public transit (41 percent); and too expensive (36 percent).

Then, in August, Metz and other members of the chamber joined business and community leaders from across the region in Indianapolis and Columbus. The purpose: “a deep dive into transformative transportation initiatives” in those cities, as chamber president and CEO Jill Meyer noted in the chamber e-newsletter. “In Indy, we saw the fruits of a sustained and intentional effort by the entire community to invest in basic transit infrastructure to strengthen that city’s economic future. In Columbus, we got a fascinating look into their Smart Columbus work, which is leading the national conversation on the future of personal mobility and its impact on every aspect of life.”

Those August meetings helped lay the groundwork for the development of a better transportation model for this region—a regional transportation initiative “to move the needle where it needs to go,” says Metz.

That initiative, scheduled to launch sometime in Q1 2018, will set the framework for what is to come in the region with regards to transportation, and how to achieve it. The initiative will address a variety of factors, says Metz, including:

– Public transit to connect people to jobs: “What we have is inadequate, we need to improve those options,” says Metz. The chamber advocates a regional, multi-modal transportation network that is affordable, reliable and plentiful.

– Infrastructure projects designed to efficiently move people and goods within and through the region: “These projects are critically important to our region, and include the Western Hills Viaduct and Brent Spence Bridge projects.”

– Funding plans that address the move from concept to construction: “Where are the dollars going to come from? We need to address all levels of government involvement.”

– Transportation innovation: “How does technology—including autonomous vehicles—help solve the challenges our region faces?”

Both Metz and Vogel point out that it’s key that the chamber is not operating in a vacuum when it comes to addressing the region’s transportation challenges and solutions.

“We look at our peer cities such as Indianapolis, Nashville, Austin—what we see is that each of those cities have a wide range of stakeholders in the mix. We, too, are engaging with as many partners as we can. We can’t get the work done alone,” says Vogel.

The value of the senior business leaders and others involved in the regional transportation initiative can’t be overstated, says Metz. “They’ve made the commitment to really dig into this issue—not just their own corporate issues, but broader regional issues as well.”