On Easter Sunday in 2002 while visiting his in-laws in Milford, Chris Habel saw an announcement about the city’s plans for a controversial piece of river bottomland.

Habel, an attorney with Frost Brown Todd and today member-in-charge of its Cincinnati office, didn’t know it, but that would launch him on a 15-year odyssey over the historically significant farmland at the confluence of the East Fork and Little Miami rivers.

It resulted in the creation of the nonprofit Valley View Foundation, a grassroots group of volunteers, which Habel leads as board president, that maintains the 190-acre Valley View Nature Preserve. The preserve, which is free and open to the public, includes streams, wooded hillsides, prairie and wetlands on the walkable site in the heart of the City of Milford.

The farmland, which has a Native American history dating back at least 12,000 years, was once part of a Revolutionary War land grant and was farmed for hundreds of years by some of Milford’s founding families.

Today it includes more than five miles of trails, offers community gardens plots, has one of the region’s first hops growing yards and hosts events ranging from cross-country meets to fall hayrides.

“It’s very unique within the I-275 beltway, or in any city, to have that large a piece of property that has been preserved,” says Jeff Wright, Miami Township administrator and former Milford city manager.

Wright, who at the time was Milford’s assistant city manager, says Valley View wouldn’t have happened without Habel.

“While there are dozens of individuals and families that were part of the effort,” he says, “it’s safe to say he was critical to the success of the project.”

Milford and a private developer had been involved in an extended legal dispute over the land for years, but by 2002 the developer planned to sell it to the Milford Exempted School District, which wanted about 20 acres to build the Pattison Elementary School.

Under Ohio law, the district could auction the remainder of the property to another interested developer or sell it to the City of Milford. While there was community support for preserving the land as a park, finding the money was a barrier.

Habel, who grew up in Mount Lookout and still lives there, says he has fond memories of spending time as a youth on the Adams County farm of one of his neighbors.

“The neighborhood kids would pile in the car on the weekends and go out there and play around on the farm. This property reminded me very much of that,” he says. In addition, the family of his father-in-law, Robert Laudeman, one of Valley View’s founders, once farmed some of the land. Most of the land was in the 100-year flood plain of the East Fork “so that’s not really smart development,” says Habel, an environmental lawyer with a civil engineering degree whose practice involves complex development issues all over the country.

Habel approached the city with a novel idea: If it bought the remaining acreage from the school district, the newly formed Valley View Foundation would attempt to buy it from the city for a nature preserve.

Habel says the City of Milford deserves a lot of credit.

“They saw the vision I saw and were willing to take a risk as well,” he says.

The purchase price was about $2.3 million, but at that point the foundation “didn’t have two nickels to rub together,” Habel admits.

Valley View planned to buy the land in installments and reimburse the city through a combination of grants from the then-new Clean Ohio Program and seed money solicited from a number of community sources such as the Greater Cincinnati Foundation.

Early on when Valley View didn’t get one of the initial Clean Ohio grants Habel stepped up and wrote a check on his home equity loan to cover a payment.

“I thought it was critically important,” he says. “I would have regretted it if it didn’t work out [but] I’m happy I wrote the check because of the way the story ended.”

As a volunteer effort, Valley View relies on Habel, who worked in construction through college, and others to maintain the property in their spare time. 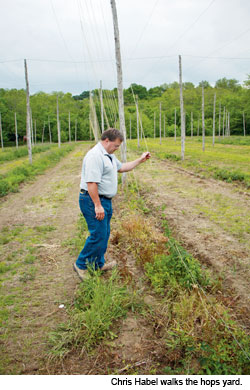 The local craft beer boom was starting to take off in 2011 when Habel and some friends were at Allyn’s Cafe in Columbia-Tusculum after working at the preserve when somebody suggested they grow hops to support the foundation.

When they approached some local craft breweries, Habel says, “to say they were skeptical is probably an understatement.”

Undaunted, Habel and his friends planted 12 varieties of hops in 2013 on 21-foot high trellis system they built on a one-acre plot. At that point, hop growing was just starting to take off in Ohio and they learned their hops yard was four times bigger than any other in the state.

To harvest the hops, Habel and his friends, Doug Bulla and Chris Elsner, at their own expense, bought and imported a 40-year-old automated hop harvester from Poland. It’s one of only two in Ohio.

Some of Valley View’s hops have ended up in local craft beer, such as one brewed by Taft’s Ale House to benefit the foundation. They make the harvester available to other hops growers for a donation to the preserve.

“We’re a nonprofit,” says Habel, not commercial hops growers. “We’re doing this really to drive visitors and attention to Valley View and bring a few dollars back into the foundation.”

With the land and the organization now secure, Habel says the foundation is thinking about what’s next.

“For the first 10 years it was literally all hands on deck to buy and save the land,” he says. “Now it’s what do we do with it? Where go from here?”

There are new members on the Valley View board and there’s discussion about using the 200-year-old Arrowhead Farm house, acquired in 2015 with 40 additional acres from the Gatch family, as an event center or museum. The lawn out front could be used for events or concerts. Habel says. The foundation has restored two barns on the site and Milford Pottery uses the third.

“For me the biggest thing is getting families and kids outside,” he says. “That’s what Valley View has always been about, thinking about my childhood playing on that farm in Adams County.”