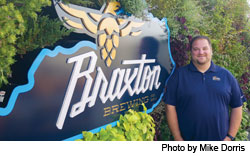 The true story behind Braxton Beer, the brewery’s family ties and VIVELiz Engel Stop if you’ve heard this story before. Hometown kid with a passion for beer starts homebrewing in his garage. A few years later, and he and his brother have turned that hobby into a bustling craft brewery.

It sure sounds like a familiar tale. Except the details behind Braxton Brewing’s founding are a little more intricate and interesting than just that. And given the growth of its latest product, VIVE, a local hard seltzer, it’s a company that could also be on pace for some big change in the future, says CEO Jake Rouse.

He’s that latter brother, by the way. And to get the true story, you’ll have to start with him.

Rouse’s career, it turns out, starts far from the confines of a beer hall. It’s an ongoing joke at Braxton today that he’s not allowed anywhere near production. (That’s a job still largely reserved for Evan Rouse, that aforementioned hometown kid. Evan started to homebrew—winning competitions—before he could even legally drink, at age 16, Jake says.)

Jake studied entrepreneurship at Indiana University and, afterward, joined a tech company in Indianapolis called ExactTarget. He spent four and a half years there, where he says he “learned a lot about high growth, fast-paced startups.”

Around the same time, Evan was starting to brew beer in the family’s garage on Braxton Drive in Union, Kentucky. While Jake “never thought” he would leave tech, he saw an opportunity. A 52-page business plan followed. Eighteen months later, in March 2015, Braxton made its debut.

“We never did really expect all of this. In all honesty, when we started the brewery, we thought we were a little late to the game,” Rouse says. “We thought the market had already seen its explosion, but I think since we located ourselves in Northern Kentucky versus Cincinnati, that really helped us.”

In less than five years, Braxton has grown to Greater Cincinnati’s third largest craft brewery. And 2019 has been just as nuts: Braxton has opened a new rooftop bar at its headquarters in Covington this summer; is adding a third location in Fort Mitchell in October, at the former Remke site on Dixie Highway, that will focus on bourbon and barrel-aged beer; and is poised to nearly double production over last year.

Oh, and VIVE, its own hard seltzer, is going gangbusters. In August, Braxton inked a deal to be the official hard seltzer of the Cincinnati Bengals. For Rouse, not only does that mean increased brand recognition but, as a lifelong fan, it’s also just flat out cool.

“It’s just awesome to know that we’re able to work with the team and grow together and do these things,” he says. “That doesn’t happen in a lot of other industries.”

Braxton may be most well known for beers like Storm and Black Raspberry Chocolate Chip Stout, and its “Lift One to Life” philosophy, but it’s VIVE that’s proving to be a game changer. Growth in the hard seltzer market—led by brands like Truly and White Claw—has surged. It’s a category currently worth $550 million, and some estimate it could grow to reach $2.5 billion by 2021.

Rouse credits Braxton’s innovative style to VIVE’s quick launch—making the drink requires unique and new equipment. He says Braxton was first-to-market in Cincinnati to release an adult beverage of this kind.

“People younger than myself—I’m 29—and people in college, they’re either not drinking or they’re trying to drink healthier,” Rouse says. “We’ve seen this happen in beer forever. Mich Ultra is growing at an absurd rate. The seltzer category also plays toward that health and wellness trend, and I don’t see growth slowing in that category for less than five years.”

Braxton’s growth means many things. For Rouse, he’s able to delegate to other key leaders. To take the family angle full circle, the two hired their dad, Greg Rouse, in January 2018 to be the chief operating officer. He brings decades of corporate experience. As the top boss, Jake Rouse’s day-to-day varies, but he still works closely with all facets of the operation, from sales, to marketing, taprooms and production.

It means continued growth for Covington, where Braxton has been absolutely catalytic for the city’s revitalization. The brewery’s new 5,000-square-foot rooftop was more than just a scenic add-on. The company had outgrown its space but spent $5 million to expand its footprint, a move that meant purchasing its building at 27 W. Seventh St.

“We had to make a decision,” Rouse says. “Did we want to stay local and, if so, how were we going to make this a destination location? And we didn’t really want to leave [Covington] by any stretch of the imagination.”

There’s now more space for production. Braxton has 66 employees in all and sells beer in Ohio, Kentucky and Tennessee; that will expand. Production will top 25,000 barrels in 2019, up from 17,000 last year.

And there’s even more focus on VIVE.

“It’s changing everything,” Rouse says. He predicts the seltzer, which Braxton debuted early this year and includes flavors like mango, lime and blood orange, could be bigger than Braxton itself.

“We’re learning a lot about the category, and we think there’s a lot more potential for VIVE to play in other states than our beer,” Rouse says. “It’s given us an opportunity to grow in ways we never imagined. And don’t get me wrong, we’ve had a lot of failure as well; we’ve had a lot of products that flopped, that we put a lot of money into, but that’s what innovation is all about. You work really hard to create products you’re proud of, and every once in awhile, you find one that hits.”

And for Rouse, maybe VIVE could make an interesting segue if he ever moves on from craft beer. There’s no immediate plans for that. But he’s thinking up new ideas all the time. It’s hard to leave that entrepreneurial spirit behind.

“We’re very happy with the business we’re building, it’s been really great, but I don’t know if this is the last thing I’ll ever do,” he says. “I think there’s a lot of opportunity to continue to grow in the beverage industry, and I definitely see a couple ideas that we’ve been kicking around that don’t necessarily fit for Braxton but could be businesses in the future. Who knows where it goes?”