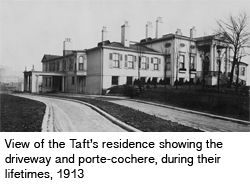 The museum’s “Built to Last: The Taft Historic House at 200” exhibit will be open through Aug. 16, says Sarah Ditlinger, senior marketing manager.

The exhibit includes historic objects on display in the museum’s Stinton Gallery, including a scale model of the Baum-Longworth-Sinton-Taft Historic House, the possible front façade and floor plan of Martin Baum’s original house, glazed porcelain and marble bathroom tiles circa 1890, wallpaper fragments from the late 19th century, and bottles and teacup and saucer fragments discovered in 2002 while excavating the property behind the museum to build the parking garage, says Ditlinger.

The exhibit also includes a self-guided tour of the original home, which was built 200 years ago in 1820 by merchant and entrepreneur Martin Baum, she says. “There’s a guided map that showcases what the rooms would have been used for back in the day,” Ditlinger says.

The original house was called Belmont Square and included a 2,500-square-foot main floor—a perfect square—with a foyer and four grand rooms that were most likely used for entertaining. The bedrooms were most likely upstairs.

Additions to the house were built over the years by other prominent Cincinnatians who owned the building, including attorney Nicholas Longworth, who added north and south wings to the original square house and an ornate portico to the front entrance with a triangular roof supported by stately columns.

He also hired African American painter Robert S. Duncanson to paint landscape murals in the foyer, now considered to be one of the finest suites of domestic murals dating from before the Civil War.

David Sinton, an iron industrialist and real estate investor, and his adult daughter, Anna, occupied the house beginning in 1871 and, in 1873, Anna married Charles Phelps Taft, a lawyer and Ohio state representative.

Taft and Anna Sinton Taft remained in the house after David Sinton’s death in 1900 and assembled an exceptional collection of paintings and decorative arts that visitors to the exhibit will be able to view during the tour, says Ditlinger.

The Tafts donated the building, which is now a National Historic Landmark, and their incredible collection of artworks to the public for a museum. The transformation of the home into a public museum began after Anna Sinton Taft’s death in 1931.

The “Built to Last: The Taft Historic House at 200” exhibit will be one of the last times the public will be able to tour the original part of the building until March 2021. Preservation work that includes repairs to the façade and exterior of the building will start in October. “This is a good last chance to see it up until they do the preservation efforts,” she says.

So how is it that a house built 200 years ago in what is now downtown Cincinnati still standing? It’s simple. “People care about it,” says Ditlinger.