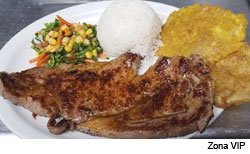 Zona VIP in Springdale brings authentic Colombian recipes to the TristateJuli Hale People are raving about the fancy hotdogs being served by a small Cincinnati restaurant, but it isn’t the trendy eatery you might think.

Dished up with a variety of toppings not found with ballpark dogs, including bacon, chicken, shredded beef, potato chips and pineapple sauce, the $3 dogs at Zona VIP are only a small part of the restaurant’s menu. But don’t ask for tacos—those are not part of the traditional Colombian cuisine offered by the owners, Colombian natives Jose Serrano and his wife Esperanza.

Esperanza, who was a doctor in her native country before moving to Ohio 15 years ago, cooks simple foods and Colombian specialties. Empanadas, arepas (grilled corn meal filled with a mix of meats and toppings), hearty soups such as modongo and ajiaco, and mazorca desgranada—a favorite Colombian snack made with fresh grilled corn sprinkled with cheese, drizzled with a variety of sauces and topped with crunchy potatoes—dominate the menu.

“People go to Yelp or Google and read the reviews and say, ‘Why not?’ then come in and try different foods. When they people come and try it, they always come back,” Jose says.

The meals, made from family recipes, use fresh ingredients that are unfamiliar to customers unfamiliar with Colombian food such as oxtail, tongue and tripe.

Bandeja paisa, the most popular dish in Colombia, is also the most popular with Zona customers. The large plate is filled with white rice, ground beef, chorizo, fried egg, pork rinds, kidney or pinto beans, ripe plantain and an arepa.

The restaurant is closed only on Wednesdays and Esperanza cooks every meal.

“She’s the boss. She’s doing everything,” says Jose who runs the front of the business, which has been open for three years in an unassuming building on the corner of Springfield Pike and Peach Street in Springdale. The couple’s three daughters work at the restaurant on the weekends.

“[Esperanza] likes to cook but didn’t originally consider cooking in a restaurant. The first day we were open was very crazy because we had a full house and we don’t have any experience in the kitchen,” says Jose.

Business is good now, Jose says, and he and Esperanza have fallen into a good rhythm of meeting the needs of their customers. They’ve added some menu items by request and wait times have gotten much shorter. Today, meals, which aren’t prepared until they are ordered, are served in 15 minutes or less. While they wait, customers can enjoy the Latin music playing over the speakers and the traditional bric-a-brac hanging on the walls.