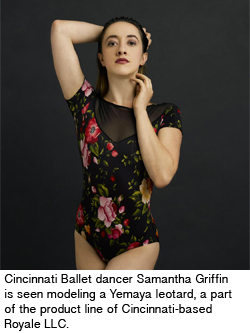 Cincinnati Ballet dancers turn their passion for dance into fashionDavid Lyman They thought he was just a ballet dancer.

And it’s true that Cuban-born Rodrigo Almarales was an excellent and dashing performer. But what Cincinnati Ballet’s audiences didn’t realize when Almarales was hired in 2011 as a 22-year old soloist is that tucked away inside all that onstage bravado was an entrepreneur with an unquenchable drive for more.

All the while he was dancing roles in King Arthur’s Camelot and The Prodigal Son, he was wheeling and dealing, inventing a handful of dance-related products and preparing to launch a dancewear company with his wife, Cincinnati Ballet principal dancer Sirui Liu.

It was an understatement.

You’ve got to go back to 2012 to fully grasp what Almarales and Liu have accomplished.

Almarales had just snagged the silver medal at the Helsinki International Ballet competition and had been promoted to a senior soloist position in Cincinnati.

He was on top of the world.

But for Almarales, enough was never enough. Even as he settled into his position in Cincinnati—he soon became a principal dancer—he seemed restless. Of course, he was like that before Cincinnati, moving from a company in Germany to one in Boston, stopping over in Italy long enough to be a top-ranked finalist on a network TV show.

But he was already at work on the product that would spring him from the limits of a dance studio. During his spare time in Helsinki, his mind hadn’t been on the next ballet he might learn. It was on a product that didn’t yet exist. Almarales had always had trouble with his feet. That’s a huge problem for a ballet dancer. His dream was to find a device that could help him stretch his feet and make them stronger without injuring them.

When he learned there were no workable products on the market, he set out to invent one.

Two years later, Almarales and Liu launched Improvedance. Their first product was called THE-footstretcher. Manufactured in Liu’s native China, it was immediately successful. On weekends when they weren’t performing they would travel to dance conventions and competitions, set up a booth and go to work. They promoted their growing product line through studios and teachers and dance publications.

“It’s stressful and exhausting,” says Liu, who learned and performed the leading roles in Swan Lake at the same time that the company was launching its newest and potentially most profitable product line—leotards.

The line is called Dancewear Royale. And, in many ways, the line looks to be a game-changer in the American dancewear market.

Now, if you’ve never shopped for leotards—and you probably haven’t—there are a few things you need to know. For many decades, the dancewear market was a pretty drab one. Most ballet studios demanded that students wear black leotards and pink tights. Even when things began to change in the 1970s, it was hard to find anything much beyond dark blue or brown or white.

Now, there are lines with color. But Dancewear Royale has upped the ante considerably. Take a look at the website—improvedance.com—if you need convincing. They offer a kaleidoscopic array of colors. Some have mesh panels and varying sleeve lengths. Some even come with detachable hoods and multi-colored patterns that could pass as high fashion. Most radical of all is that nearly all of them are customizable. You want a different color or have some mesh in a different place? You just re-design it online.

“All of the designs are so different and contemporary compared to other leotards that are out there,” says Samantha Griffin, a Cincinnati Ballet corps de ballet member and an occasional model for Dancewear Royale. “I’m a taller dancer, so it’s usually very hard for me to find a leotard that fits me. But every style I’ve tried with these has been extremely flattering.”

And Griffin isn’t alone in that assessment. Dancewear stores all along the eastern seaboard and into the Midwest are snatching up the leotards as quickly as Improvedance’s wholly owned Miami factory can create them.

“I love the designs they have,” says Kat Wolf, owner of NKY Dancewear in Cold Spring, Kentucky. “Some of them are very bold, which is very popular with many dancers. But then they have some designs that feel more traditional but use unusual colors. They have such a good balance of bold and elegant. And the cuts are flattering, too. For me, that’s a trifecta: bold, elegant and flattering.”

As this story goes to press, Almarales and Liu are, like so many other companies around the world, navigating the uncertainties of a China-based supply chain in the age of the COVID-19. Currently, all of the leotard fabrics come from China, as do the other product lines.

But they have several months’ supply of fabrics in-hand in Miami. And, in the meantime, they are driving traffic to their website with streaming dance and Pilates classes given by notable teachers.

They recognize the complications. But they’re not panicked.

“I think that has to do with where we come from,” says Liu. “It’s exciting to do business in this country. It’s what you’re supposed to do here. We have the freedom to do what we want to do. It would have been impossible to do this if we were still in China or Cuba.”

“This is the best country to have a business,” agrees Almarales. “As long as you make money and pay your taxes, the government doesn’t really care too much about what you do. At first, we looked at Europe, but no—this is much, much better.”