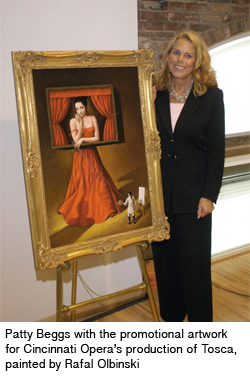 Patty Beggs and her impact on the Cincinnati OperaDan Hurley The Cincinnati Opera will celebrate its 100th anniversary this summer. When the season hits its centennial crescendo in August, Patty Beggs, who has been with the opera for more than a third of its history and spent 23 of those years as the managing director, will retire.

It is one thing for someone who works for a large, complex company like P&G or Fifth Third to move to a new job every few years inside the company, learn new technical and leadership skills, and get rejuvenated. But how does a person grow and stay fresh over four decades in a smaller organization?

When Patty joined the opera in September 1984 as the director of marketing, she had a passion for the art form that she had discovered in college. “What engaged me in opera was the relevance of it,” says Beggs. But what she found in 1984 was an organization that tried to convince people to buy tickets because it is “good for you,” which she found “demeaning.” Plus, it wasn’t working. Attendance was down and when she offered her friends a free ticket, the “excuses were lame, like ‘I have to clean out my drawers.’”

“I didn’t see anybody talking about the emotional, visceral response that the combination of the stories and the music and the grandeur of being in a performance hall [offered],” she says. She set out to make attending an opera a complete experience that starts with street activities outside Music Hall and carries through with decorations in the foyer and the hall.

Her approach meant making the relevance of individual operas visual by drawing on contemporary references with bold, sensual images that drew connections, like the connections between Carmen and Pretty Woman. Patty pushed those images and references not just to traditional opera patrons, but in print ads, radio ads on stations like WLW and WEBN, and on street banners.

Certain opera writers “abhorred what I was doing. That I had desecrated the art form by pandering to the lowest common denominator of the mass public,” she says.

Although Beggs didn’t know it, she successfully implemented something the opera had unsuccessfully tried 40 years earlier. In the late 1940s the opera hired Harry McWilliams out of Hollywood. McWilliams advertised Carmen in newspaper ads as “an opera of torrid passions where love is dear and life is cheap,” and Samson and Delilah as an opportunity to see “passionate women lure a man to destruction with false love.”

The reaction was swift. One patron, Mary Jane Phillips of Lebanon, charged in a 1947 Letter to the Editor in the Cincinnati Post that McWilliams was prostituting the fine arts just “to fill seats,” and that an ad for La boheme read like a “an advertisement for an Adults Only motion picture at a burlesque house.”

McWilliams didn’t last and the buzz saw of opposition he ran into had been long forgotten by the time Patty Beggs arrived. Sometimes it may be good to not know history.

When she was named managing director in 1997, Beggs led the company in another new direction. That journey began in 2000 when Beggs took a group of board members to San Francisco to see Dead Man Walking, the story of Sr. Helen Prejean’s effort to make Americans face the reality of the death penalty. After attending the opera, “the group decided in the van on the way back from the theater that we had to do it.”

That was the beginning. In the intervening years, the opera has commissioned several new works, including Margaret Garner, the locally based story of the Underground Railroad with a libretto by Toni Morrison. So far, the Cincinnati Opera has workshopped 12 new works, some of which the company has performed and some that have been produced by other companies. “We have immersed ourselves in creating product for the art form as well as presenting it. It has energized the company and the community and it certainly has put us on the map,” she says.

Creating new operas has been the company’s doorway into not only expanding the audience but diversifying it. “If there is one thing I have learned,”Beggs says about committing to greater diversity, “[it’s that] authenticity and trust don’t happen overnight. It has to be built. I think our organization has been smart and persevering in recognizing that inclusion is essential for survival.”

Throughout her groundbreaking career, the leadership principles upon which everything else stands are trust and collaboration with her board. Having board members from P&G, the most aggressive marketing and branding firm in the world, and the collaboration of great leaders like Don Hoffman is fundamental. Learning to collaborate with board members—not manipulate and manage them—is the most important skill for a not-for-profit leader who wants a long-term career.

After 35 years, Patty Beggs says that she can let go “completely at peace” knowing that the board has selected Christopher Milligan, her longtime colleague, as the new managing director.