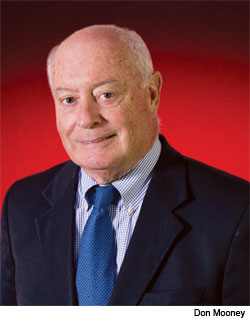 All that ghoulish talk of “American carnage” made some of us cringe as we watched Donald Trump’s inauguration address. But there was one thing that some of us who did not vote for our new president could applaud—his promise to “rebuild our country,” with a focus on crumbling and neglected infrastructure.

As states that helped provide Mr. Trump’s “huuuge” electoral college victory, shouldn’t Ohio and Kentucky be first in line as all this building takes place? And while the president spoke of new roads, rails and bridges, what about some of those older, big ticket items that have been moldering here without a plan to fix or replace them?

Exhibit A is the Brent Spence Bridge.

The bridge was designed to handle 82,000 cars and trucks per day. Now, 54 years later, the bridge is used by about 186,000 vehicles daily. The bridge hasn’t been painted in 24 years. Peeling paint and rust just adds to the bridge’s back-country charm, right? But watch out for those car-crushing concrete chunks falling from the sky when you tailgate before Bengals’ games!

All that additional traffic has caused more accidents—averaging two every week as all those cars, trucks and their texting drivers squeeze through what has become a choke point on the interstate connecting Michigan, Florida and all those states in between.

As Brent Spence Bridge “carnage” accumulates, the politicians have waded in. Obama stood beneath the bridge in 2011, urging Congress to pass an infrastructure bill that would fund a replacement. The GOP Congress said, “Never mind.”

Governors Kasich (R-OH) and Beshear (D-KY) authored a plan to finance a replacement using a “public/private partnership” that would require tolls. Kentuckians had embraced a toll bridgeacross the river in Louisville, where most of the traffic crosses from Indiana. But they were outraged at the concept of Kentuckians paying to cross the river for jobs on the Ohio side. The election of anti-toll Gov. Matt Bevin sent planners back to the drawing board.

When candidate Trump brought his media circus to town last summer he promised to replace the bridge. Documents prepared by his transition team, based on input from the nation’s governors, rank it No. 2 on a list of 50 Emergency and National Security Projects totaling $137 billion that would launch the president’s infrastructure plan.

The transition team’s summary quotes a $2.5 billion price tag for the bridge, creating 2,500 jobs. Several other Ohio projects also make the list, including lock improvements on the Ohio River and a $2 billion National Research Lab for Infrastructure to be located in Columbus. But does the president’s promise of more spending on infrastructure mean there is a new bridge in Greater Cincinnati’s future?

congressional delegation should be behind this investment on their home turf. Who could be more influential than Senate Majority Leader Mitch McConnell and his fellow Kentucky senator Rand Paul in bringing home the bacon, or, in this case, steel and asphalt? Ohio Sen. Sherrod Brown is on board, but what about Cincinnati’s own Sen. Rob Portman, or Reps. Chabot and Wenstrup?

One problem may be the GOP’s knee jerk reaction against either “budget busting” spending or any tax increase. Typically, bridge funding comes from the Highway Trust Fund, filled primarily by an 18.4-cent federal gas tax that has not been increased in decades. As gas mileage has gone up, gas tax receipts have flat lined. Without an increase in the gas tax, the fund is running on fumes.

Some Republicans, and Trump, say they want infrastructure to be funded through private investment, encouraged by generous tax credits. But that sort of “public/private” funding scheme—proposed by Governors Kasich and Beshear—requires a revenue stream to pay off the investors. So we’re back to those dreaded tolls.

Finally, there is the complication of Mayor Cranley’s decision to tweak Trump and declare Cincinnati a “sanctuary city.” Will that election-year gambit by the mayor cause the bridge to lose its No. 2 slot on the president’s emergency project list?

Those of us on the Ohio side of the river who took heart in the president’s promise to build all that new stuff may have a very long wait before we have a more reliable path to CVG.