The best way to bring people together is through food and sports, says Tom Hickerson, field marketing manager for Noodles & Co. That’s why the partnership between the Broomfield, Colo.-based company and the Cincinnati Reds is such a good fit, he says.

Noodles & Co. is this year’s presenting sponsor of the Reds Community Fund Match program. The Match program is designed to bring youth baseball teams from the inner city and suburbs together in the spirit of diversity, interaction and friendly competition, he says.

Each Match organization will participate in a home-and-home series, in which teams blend and play and, along with their families, mingle and cookout, according to the Cincinnati Reds website. The program culminates in a field trip to Great American Ball Park in September.

“They’re just trying to bring the communities from the suburbs and the city together to have fun,” says Hickerson. He says there are 16 communities participating in this year’s program and about 20 total events are planned.

Noodles & Co. will be providing the food at the Match events, he says. “When you’re meeting people at something as fun as noncompetitive scrimmage baseball where you have people from different backgrounds, different communities, coming out and meeting together, to be honest, food and sports are a great way to bring people together,” says Hickerson.

The partnership was formed when Hickerson says he talked with Mark Fields, corporate partnerships manager with the Cincinnati Reds. Hickerson says Fields told him that the Reds Community Fund Match program would be the perfect fit for Noodles & Co.

“He’s like, ‘This is perfect for Noodles and Co.,’” says Hickerson. Noodles & Co. officials also thought the partnership was a good match. “This was a great way to stay involved with the local community and kind of spread the Noodles love,” he says. 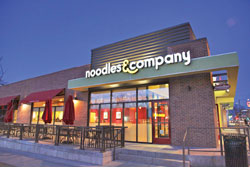 Another reason the partnership between Noodles & Co. and the Cincinnati Reds Community Fund’s Match program is such a good fit is because the program fits with the company’s mission and values, says Hickerson.

He says the company’s four core values are: We Care for our team members, guests and communities. We are Passionate about serving great food. We Show Pride in who we are and what we do. We Love Life and have fun every day.

“We started talking about what Noodles’ mission and values are, what our core values are and what they were trying to achieve and Mark picked this area,” he says. “So Mark kind of hand selected us to be the community fund partner.”

This is the first year that Noodles & Co., which has seven restaurants in the Greater Cincinnati and Northern Kentucky area, has partnered with the Match program. “And we’re super excited about it, too,” says Hickerson.