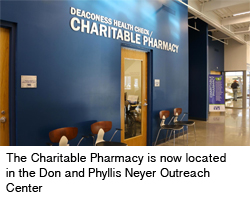 St. Vincent de Paul prescribes more than medication with its Charitable PharmacyCorinne Minard When the Society of St. Vincent de Paul (SVDP) in Cincinnati opened its Charitable Pharmacy in 2006, its only purpose was to fill prescriptions for those with no health insurance. But over the years, that mission has changed and grown to do so much more.

Today, the pharmacy also serves those described as underinsured—people who have insurance but, because of high co-pays (which can sometimes be 30-40% of the price of a medication), can’t afford their prescription—has moved to a new location with additional hours and opened a second location in Western Hills. SVDP has filled more than 500,000 free prescriptions, worth more than $65 million.

But the Charitable Pharmacy has gone a step beyond that by becoming an outcomes-based pharmacy, too. “When you talk about pharmacy, you don’t normally talk about positive health outcomes, but through our clinical pharmacy program, we generate positive health outcomes for the patients that come in,” says Mike Espel, director of the Charitable Pharmacy.

SVDP started its clinical program in 2008 to help its clients become healthier in addition to receiving prescriptions. All pharmacy clients receive a health screening and have their drug regimen reviewed. With this program in place, SVDP has seen a 49% reduction in hospitalizations, an average A1C reduction (the blood test used to test for blood sugar) of 1.3% in new patients with diabetes and an 81% medication adherence rate in its clients.

The pharmacy has taken this a step further, though, with programs designed to educate and help clients lead healthier lives.

Espel says that the pharmacy has found great success with its smoking cessation program. Those who join the program are given free nicotine replacement therapy, free once-a-month face-to-face counseling and weekly check-ins with pharmacy interns. At the start of the program, 37% of the pharmacy’s patients smoked, much higher than the national average of 14%. Since the program was started in 2015, that percentage has decreased to 23%.

Another program that the pharmacy has found success with is its PHARMer’s Market. “We know that—and with diabetes in particular—food makes a big difference,” says Espel. “So we decided, what would it look like if we gave people food along with their prescriptions?”

Thanks to a grant from CVS, SVDP gave 50 patients in the pilot program healthy food and recipes once a week for three months. At the end of the program, 89% of patients saw a reduction in their A1C levels. To further add to the program, SVDP is planning on offering healthy cooking classes in the learning kitchen at the Don and Phyllis Neyer Outreach Center, which will be called the PHARMer’s Kitchen, to better assist people in learning healthy habits.

“We feel like if we can get them to look at what healthy food looks like and then show them how to cook it, then hopefully those two things together could help us to maybe get grant funding to get some more healthy options for our pantry,” says Espel.

Mike Dunn, executive director of SVDP in Cincinnati, sees the pharmacy and its programs as aligning perfectly with the mission of SVDP itself.

“The quote for the society is no act of charity is foreign to the society. Essentially, as we’re looking at the whole being if you will, we found that this is a need that has largely gone unmet in this community,” he says. “There’s story after story after story that we truly are saving lives with the Charitable Pharmacy. It’s very much a resource that’s in line with what we do here at St. Vincent de Paul.”