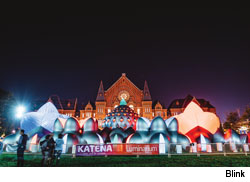 Blink returns for its second iteration Oct. 10-13 with another celebratory weekend of art, light and communityKevin Michell In the weeks following Oct. 15, 2017, Cincinnatians were aglow with city pride following the first-ever Blink light and art festival. Over a million people visited downtown that weekend and the buzz throughout the city continued long after the event had ended.

That may seem a tough act to follow, but the second edition of Blink Cincinnati, Oct. 10-13, is all planned out with brand-new art, projection mapping and light installations along many of the same streets of downtown and Over-the-Rhine, as well as seven blocks of Covington’s Madison Avenue for the first time.

The light shows and art fixtures will stay in place throughout the weekend, so visitors can experience the city-spanning event at their own pace and in whichever order they’d like.

“You can pretty much come downtown and park anywhere in Over-the-Rhine or downtown or Covington and you will be able to walk around and experience Blink and experience all that those neighborhoods have to offer,” says Brendon Cull, senior vice president and chief operating officer of the Cincinnati USA Regional Chamber, which is handling event production in concert with local organizations Agar, ArtWorks, Brave Berlin and The Carol Ann and Ralph V. Haile Jr. Foundation.

However, the one have-to-be-there event is the Blink Light Parade presented by Skyline Chili, which kicks off the weekend with around 85 different participating performers and legendary local chef Jean-Robert de Cavel as grand marshal.

“It’s going to be so creative and beautiful that I think people are going to remember it for decades,” Cull says.

Blink 2019 also promises the return of the Architects of Air, whose interactive luminarium Katena was a massive hit in Washington Park during the 2017 edition. This year’s giant air sculpture, Dodecalis, is being kept a tightly guarded secret until festival time but promises another one-of-a-kind experience. Dodecalis will be the only ticketed event at Blink, as the sculpture will have a maximum capacity that needs to be monitored and adhered to.

But the coup-de-grace of Blink 2019 will be the lighting up of the Roebling Bridge through the weekend, serving as a gleaming symbol of the city itself and the collaboration between Cincinnati and Covington for this year’s event. The Greater Cincinnati Foundation, Vincent Lighting of Erlanger and Brave Berlin worked together to make this centerpiece possible. Oggo will provide free rides across the bridge for attendees moving from one side of the river to the other.

Covington’s Madison Avenue will be the focal point of Blink on the Kentucky side, with the blocks flanking Braxton Brewing Company and Hotel Covington alight with art. There will also be a free concert by Grouplove on Saturday night in the RiverCenter parking lot.

Cull personally looks forward to the spontaneous way Blink makes connections between visitors to the city during the event.

“The art and showcasing our region is fantastic,” he says, “but there are these moments where as a community we come together, we are around people who we may or may not be around on a day-to-day basis as we are having a shared experience together. And that is, I think, the true beauty of Blink.”