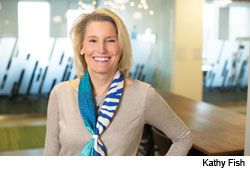 Kathy Fish, P&G’s chief research, development and innovation officer, is prepping the company for a future of innovationLiz Engel For more than 175 years, innovation has been in Procter & Gamble’s DNA—it’s an oft-repeated company mantra, one that’s found repeatedly on various branded web pages and the primary reason we have products like Tide, Crest and Olay.

Kathy Fish, a 39-year veteran of the Cincinnati-based consumer products giant, has seen many similar developments come to fruition throughout her career, from Pampers Pure to Pert Plus 2-in-1 shampoo. Fish, P&G’s chief research, development and innovation officer, leads R&D during a time when P&G is making a big push for stronger sales growth.

Not only is the company reinvesting in innovation—it spent $1.9 billion there last fiscal year, to be exact—it’s also more lean, working much more like a startup. And Fish, who oversees about 6,700 global scientists and researchers, roughly half who are based in Cincinnati, acts almost like an angel investor.

It can be a guessing game, for sure, but Fish has the pedigree to back it up. She’s been a P&G’er since 1979, joining the ranks as a product developer straight out of Michigan State, where she graduated with a bachelor’s degree in chemical engineering.

She didn’t know much at the time; Procter was much more a North America company, versus global, but she liked its hyper consumer focus. It seemed like the best fit for her.

“When P&G came recruiting on campus, it was just so inspirational,” she says. “I did an internship at a chemical company, but learned what I didn’t want to do. Here, you get to see products you invented on the shelf. I just thought that was really interesting.”

She’s worked in fabric care, hair care and baby care, specifically, throughout her career. And there’s been key victories in each. Fish aided in the creation of 2-in-1 shampoos, launched initially with Pert Plus (1987), a “totally breakthrough” revolution at the time, she says, and one that catapulted hair care, a very small business at the time, into a “priority category” for the company.

During her time in baby care, Pampers business boomed—backed by P&G’s 2002 launch of “Baby Stages of Development,” a line of diapers, training pants and wipes designed specifically for different “stages” of growth, like Swaddlers for newborns, or Cruisers for more active little ones.

“All these were really breakthrough initiatives designed to delight consumers,” Fish says. “People had been working on 2-in-1 shampoos for maybe 40 years. The ability to clean the hair, while at the same time depositing something that would condition it, is actually very challenging. Baby care is a really fun business, and, technically, one of our most complex. We run our diaper lines at over 1,000 diapers a minute, and it requires precision engineering. Downy [Unstopables] took us a long time to get right. Tide PODS were built on the technology that came from Cascade Actionpacs, which was a great place to start because those dissolve in really hot water. But how do you have a film that holds liquid without leaking (etc.), but also dissolves really fast in cold water? It was a major invention. But it’s been worth it.”

In 2014, Fish was elected P&G’s first female CTO, or chief technology officer. That title got an upgrade in 2017 but is essentially the same position (“chief research, development and innovation officer” has less of an IT feel, she says). Her day-to-day varies, but includes reviewing strategy, long-term programs and more.

Part of her job does include doling out seed funding to kick-start new ideas—like Olay’s Skin Advisor (2017), an age-predicting tool that taps Procter’s massive skin database. Customers can take a selfie and receive personalized product recommendations.

Teams from P&G’s 10 core categories “pitch” her their ideas, and Fish picks the best from the lot.

“There’s definitely art and science involved, in putting it all together, and some judgment, but I’ve been in the business so long [it helps],” she says.

She also credits lean innovation—a concept normally reserved for startups—for helping accelerate speed to market, like with Pampers Pure, a line of natural diapers and wipes made without chlorine, fragrances, parabens or latex.

P&G project teams are smaller, more nimble, multi-functional and agile. Sometimes a really big idea can take five years or more to develop, Fish says. Pampers Pure came together in a much shorter amount of time.

“Our business results haven’t been what we want them to be, so we’re innovating the way we innovate,” Fish says. “The natural segment in general hasn’t been as big in some of our categories, because sometimes there’s a tradeoff with core performance, and it’s held back growth. So we’re really committed to breaking that paradigm, and the Pampers team, applying lean innovation, took on that challenge.”

Because there’s certainly more in the pipeline. Given her longevity, Fish cares less about personal milestones and more about the big picture. She’s keen on “delivering irresistibly superior product and package experiences,” another go-to company catch phrase. P&G outspends its competition on R&D; that looks to continue. She says the customer is the No. 1 reason why.

“When the consumer uses our products, if they go and use somebody else, they really miss the performance level,” she says.

“We looked at the success factors behind our billion-dollar brands and our highest growth periods, and those were all driven by big ideas—which require breakthrough technologies. So we’re very committed to doing that again across all our core businesses.”

At the very least, there’s excitement for the future. While you can find Fish’s name on the short list of potential future female CEO’s at Procter—the company has never had one, but she believes it could happen soon—she doesn’t consider herself a contender. Most company heads come from the marketing side, Fish says, and she’s made a choice to stay in R&D. It’s her home. So is retirement next?

“It depends. From a career standpoint, I’ve achieved what I want to achieve. My goals are very much company-specific right now,” she says. “I want to get back to winning at the level I know we’re capable of. We have amazing products, so how do we get it all going again? We’re making progress.”