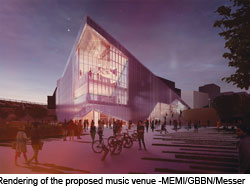 An indoor/outdoor concert hall is at the center of the Tristate’s newest dramaDon Mooney Confused by the kerfuffle over whether a new music venue will come to Cincinnati’s riverfront? Join the crowd.

In true Cincinnati tradition, what seemed to be a no-brainer has turned into a community cleaving political brawl, rivaling past controversies like the streetcar, locating a new Reds’ stadium or fluoridating our drinking water, a seminal 1960s Cincy culture war.

How did we get here?

The original idea: an indoor/outdoor concert hall, built next to Paul Brown Stadium on top of parking garages to serve nearby stadiums, apartments, offices and restaurants. Tentatively called Riverview, the venue’s dramatic design, accommodating 4,500 indoors and 8,000 outdoors, would become a jewel in the Queen City’s Crown. More than 150 nights each year concertgoers would be drawn downtown, patronizing The Banks’ bars and restaurants when the stadiums are dark.

The proposed development would also expand Smale Park, and spur the relocation of the concrete plant that creates an ugly western edge to our stunning riverfront park. In its place would be more green space, used for Bengals’ parking on game days, and open to the public the remaining 355 days of the year.

Bonus: The new venue might also set the stage to a final sayonara to that crumbling concrete bunker now called the Heritage Bank Center.

Or so it seemed. The spat broke out over who would run the new venue. Some, including Mayor Cranley, backed Columbus based PromoWest. But local poobahs picked MEMI, a Cincinnati Symphony affiliate that programs Riverbend and the Taft Theatre.

Turf wars promptly broke out. The mayor, Cincinnati City Council and the Hamilton County Commission, who share responsibility for The Banks’ decision making, began an ugly feud over the project.

Despite the city’s repeated attempts to sabotage Riverview, in October the county cut deals with the Bengals (who could have vetoed the plan) and that concrete company, pronouncing full speed ahead with the music venue.

Meanwhile, PromoWest took its dollars across the River to Newport where construction is already underway for a competing 2,700 indoor/7,000 outdoor capacity venue called Ovation.

PromoWest’s die-hard fans at City Hall argue that there is no way the Cincinnati-based music venue can or should compete with Ovation in Newport.

My view: consumers—in this case, concertgoers—benefit from competition, with more choices and maybe even lower ticket prices. All things being equal, a majority of the region’s population lives in Ohio, and would prefer the new venue in Cincinnati over the Newport option.

But why choose? There is no reason to think both venues can’t prosper in a growing region. So, City Hall, get over it! Hamilton County Commissioners, stick to your plans and finally finish the Banks with Riverview!

Then, let’s talk about demolishing that ugly, star-crossed Coliseum. Or should we revisit fluoridation?