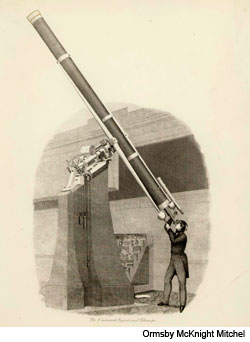 Cincinnati has a long history of supporting scientific endeavorsDan Hurley In 2018 we live in a world defined by theoretical and applied science. The frontiers are everywhere—in the vastness of interstellar space, in the mysteries of inner cellular DNA, in the interaction of changing environmental patterns and natural ecosystems, in the ability to marshal big data in the quest to perfect artificial intelligence and transform everyday life.

The roots of modern science stretch back to the Enlightenment in the 17th and 18th centuries, at a time when astronomy dominated science research. Nothing was more “disruptive” (to use the current jargon) to the established worldview than the work of astronomers. Advancements in astronomy smashed the traditional religious view that placed the earth at the center, and it became possible to describe natural phenomena through a set of laws expressed mathematically.

In the early 19th century Cincinnatians, who were living on the frontier of the New Nation, wanted to contribute to the movement redefining western society. The efforts of local leaders who put Cincinnati at the leading edge of American science 175 years ago and won the title the Home of American Astronomy will be celebrated in November at the Cincinnati Observatory.

The moving force locally was Ormsby McKnight Mitchel, an 1829 graduate of West Point and a professor of mathematics, philosophy and astronomy at Cincinnati College starting in 1836. Mitchel fixed on acquiring a telescope capable of advancing astronomy. A powerful speaker capable of holding the attention of large audiences, not unlike Neil deGrasse Tyson today, Mitchel addressed audiences of thousands about the promise of American astronomy and asked for contributions to buy a telescope worthy of his vision for America’s role in science. Having collected $7,000 by 1842, Mitchel located an 11-inch lens that was ground, but had not been mounted, in Munich, Bavaria. He commissioned a beautiful mahogany tube with brass fittings to hold the lens and shipped it to Cincinnati.

What was happening in Cincinnati stirred the imaginations of national leaders, especially former President John Quincy Adams, a member of Congress. At age 76, Adams accepted an invitation to deliver the principal oration at the ceremony laying of the cornerstone of the new observatory atop Mt. Ida (later renamed in his honor) on Nov. 9, 1843. Adams traveled 1,000 miles in 13 days by canal boat, lake boat, river packet and stagecoach to “turn this transient gust of enthusiasm for the science of astronomy in Cincinnati into a permanent and persevering national pursuit.”

Adams promoted science, especially astronomy, for decades. In his first presidential address 18 years earlier, Adams told Congress that Americans should be ashamed that European governments supported almost 130 astronomical observatories, “light-houses of the skies” as he called them, while not one existed in America. By being dependent on European researchers “are we not cutting ourselves off from the means of returning light for light while we have neither observatory nor observer upon our half of the globe?” His appeal for government support of science fell on deaf ears, but Adam’s commitment to serious American science never waned.

In his oration delivered in Wesley Chapel on Fifth Street, Adams explored the place of science in general and the history of astronomy in particular, focusing on the contributions of Copernicus, Tycho Brahe, Johannes Kepler, Galileo and the great pillar of the Enlightenment, Isaac Newton.

His organizing theme was the struggle between science built on observation and analysis and the suppression of science by a fearful religious establishment. For Adams, Galileo, “one of the master spirits of the age,” peered deeper into the skies than anyone before him, but was denounced, suppressed, silenced and imprisoned by the pope and the Inquisition.

Given that the early 1840s marked the high point of the anti-Catholic, anti-immigrant, Know Nothing movement, Adams couldn’t resist a passage comparing Newton and Ignatius Loyola, the founder of the Jesuits. Although Ignatius had the same great qualities and abilities as Newton, but “under the influence of religious fanaticism, [Ignatius] invents an engine of despotic power, a rod of iron, and puts it into the hands of frail, mortal man.” Adams certainly knew that the Jesuits had arrived in Cincinnati two years earlier to take over St. Xavier College.

Much has changed over the last 175 years. Science is now the dominant frame of reference by which we view and understand the world. And the United States government long ago became an active and significant funder of scientific research.

On the other hand, reactionary religion is still at war with science, especially in the realm of evolutionary biology. With the Creation Museum and Ark located in the region, we are at the center of that struggle. Second, the current administration is actively suppressing certain science research that does not support its political agenda, especially in the area of the environmental studies. Mitchel and Adams would be pleased with the first two developments and mystified by the last two.