Observation Wheel to soar over Coney Island this summer

The sky’s the limit at Coney Island this summer

The Island Wheel at Coney Island, the largest mobile Ferris wheel in North America, will soar 155 feet over the park along the Ohio River for six weeks starting May 26.

Coney Island, which is marking its 132nd season, says the Island Wheel will offer passengers a unique 360-degree view of the park and surrounding Ohio River valley.

The Island Wheel, featuring 36 six-person gondolas, will be located adjacent to the popular Sunlite Water Adventure area, near the Riverbend Music Center. Each ride will take about 10 minutes with the observation wheel making four rotations per session. 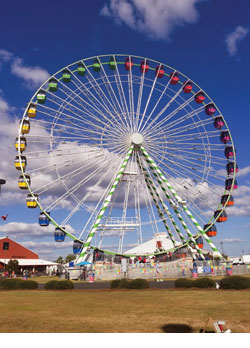 “The Island Wheel at Coney Island is an extraordinary structure, taking family playtime to new heights with state-of-the-art technology,” says Sally Derrick, Coney Island marketing director. “It is the tallest ride of its kind in Ohio and is a great way to launch an exciting 2018 summer.”

The Island Wheel is transported on 12 semi-trailers and takes four days to erect and four days to dismantle with a crew of 16. It includes six miles of electrical cable. The Wheel is coming to Coney Island from Florida and will go to the Wisconsin State fair after leaving here.

At night, the wheel will be illuminated with more than half a million LED lights, visible for miles, the park says. Admission for the ride, which ends its run on July 8, is $5.

Also new for 2018, Coney Island is partnering with ThinkTV and CET to create a “beyond broadcast” experience that combines popular PBS Kids characters with a “play and learn” environment. It will include interactives that have been chosen specifically to align with the PBS Kids mission of building imagination and curiosity.

When it’s time to cool and calm down, parents and their kids can head to the new Quiet Place area, across from the paddleboats on Lake Como.