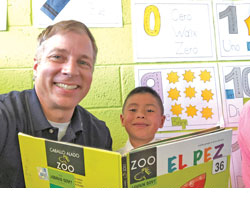 One local nonprofit is creating a middle class in Guatemala

Whenever someone asked Dr. O’dell Owens what the faculty and staff did at Cincinnati State Technical and Community College during the years he served as president, his answer was direct and inspiring: “This is where we create the middle class.”

That’s the same answer you get when you ask Joe Berninger, the co-founder and executive director of Cooperative for Education (CoEd), only he’s talking about creating a middle class in the rural highlands of Guatemala.

CoEd’s work may seem far away and marginal, but given the looming role immigration plays in contemporary United States politics and the fact that migrants from the Northern Triangle—Guatemala, El Salvador and Honduras—make up the main source of refugees seeking a new life in the United States, CoEd’s work is immediate and central.

CoEd began simply enough in 1993 when Joe Berninger’s brother Jeff volunteered to teach English in a high school in the rural highlands of Guatemala. Jeff discovered the first day that “there were no books in the school, no books in the region, no books in the country. Ninety percent of the schools in Guatemala had no books of any kind,” remembers Joe.

Jeff, who had worked as an analyst for P&G, wanted to do more than give books to one group of students for one year. He created a self-sustaining book cooperative model that still drives almost half of CoEd’s programs. The model raises the initial funds to buy paperback textbooks for every student in math, science, Spanish language and social studies. The school rents the books to the students for a modest amount (as little as $1.50/year) with the idea that the rental fees will generate funds to buy new paperbacks to replace worn out books every five years.

Guatemalan school officials were skeptical, but parents made the commitment and 94% came back that first year. The next year four more schools joined the effort and, with Joe working in Cincinnati and Jeff in Guatemala, they formally incorporated the Cooperative for Education in 1997.

The real magic of the self-sustaining book cooperative model was not only that it worked for students in Guatemala, but that it also appealed to business-minded investors in the U.S. and Canada. When Joe was on an early trip to deliver books, the school threw a party that was so raucous that an American dentist on a medical mission trip working nearby came over to find out why people were so excited. He saw the potential in the model and invited Joe to visit his Rotary Club in Lander, Wyoming, when they both got back to the U.S. Joe drove to Lander and the club donated $5,000, which was matched by the state and national organizations. (Gifts from Canadian clubs are now also matched by the Canadian government’s “magnifying good” smart foreign aid program.) Over the last 20 years, over 620 different clubs have contributed and over 1,000 Rotarians have visited CoEd schools in Guatemala.

Like many startups, Joe remembers, “Our first five years was five years of one-year plans.” Beyond that point, they began to do more serious planning, setting measurable goals, hiring staff and building capacity.

CoEd’s programs have expanded over time. They have pushed book distribution down to lower grades with their Spark Reading Program, recognizing that a 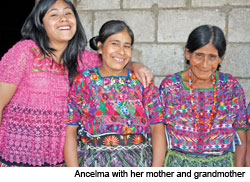 student needs to learn to read by the third grade so that they can then read to learn. Working with Professor Ben Kelcey at the University of Cincinnati and Guatemalan partners, CoEd has demonstrated that groups using their methodology progressed twice as fast as a control group.

CoEd has pioneered mentoring programs in middle schools, built computer labs in schools using the same cooperative sustainable financial model as with books and introduced the Rise Youth Development program to teach soft skills to high school students to ease the transition to the workforce.

CoEd serves the very poor in the agricultural highlands. Most adults make $4 a day and speak one of 21 Mayan languages as their first language and Spanish as their second language. Given that, CoEd has been careful to keep fees low for books and computers. Joe knows that, “all the research shows that if you graduate from high school in Guatemala, you’re out of poverty.”

Given all that Cooperative for Education has accomplished, why the uptick in migration to the north? Berninger cites government corruption and ineffectiveness as a leading push factor. He also notes that half the population is under 15 and increasingly unwilling to accept that they have no realistic prospect for a better life. He also points to the impact of a current drought and the increasing concern that climate change is driving climate migration.

The Trump Administration has suspended all USAID projects. “In my view,” Berninger says, “they need to being doing exactly the opposite of that. That is counterproductive… We need to create opportunities in home countries so people don’t have to migrate.” The Guatemalan government has created a program called “Stay Here,” targeted at teenagers who are temped to leave. Joe argues the U.S. should support that along with encouraging private investment that can provide opportunities for an increasingly educated workforce.

Whatever limits one modest Cincinnati-based nonprofit may have on an international challenge, CoEd’s trust that education is critical to creating opportunity is quintessentially American.