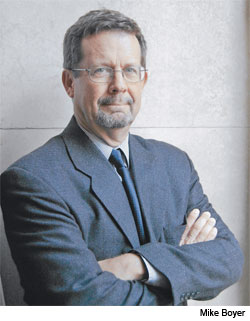 Before they were business partners, Carl Satterwhite and Scott Robertson were friends.

In the early 1990s, Satterwhite was a facilities manager for Procter & Gamble and Robertson’s company, Globe Business Interiors, was supplying P&G.

That relationship blossomed, with an assist from P&G, into RCF Group, a national supplier of office furniture, architectural design and facilities services and one of the region’s most successful minority business enterprises.

Satterwhite, who is president and majority owner of RCF, and Robertson, chairman and owner, say their personal bond was critical in the formation of the business, which employs about 100 in Cincinnati and Cleveland and last year had revenues approaching $70 million.

Satterwhite, who grew up in Mt. Healthy, says while he spent 15 years in facilities management at P&G, he always harbored the desire to be an entrepreneur.

“I always had part-time businesses,” he says. “I used to build decks, room additions and paint houses. My first entrepreneurial pursuit was going door-to-door to paint street numbers on curbs,” he says.

In 1998, he left P&G to start his own company, Infinity Services, and his first customer was Robertson’s GBI.

“It was Scott and his company that helped me grow,” says Satterwhite.

But Robertson didn’t just help Satterwhite get started. He eventually pushed him out of the nest. He told Satterwhite he had to market his installation services to Robertson’s competitors if he wanted to be successful.

“Really that’s a piece of our success story that doesn’t get told very much,” says Satterwhite. “That was the pivotal point. Not only do you have to leave, you have to go service our competitors so you can grow and survive.”

Although Robertson’s competitors began using Satterwhite’s company to compete against him, Robertson says it was the right thing to do.

“We wanted to help him create his own business,” says Robertson. “If we were his sole client, that would never happen. It was important for him to go to the marketplace and work with other furniture dealerships.”

Their relationship took another dramatic turn in 2003 when P&G, anxious to build its minority supplier network, called both minority and majority suppliers to a meeting in Cincinnati. 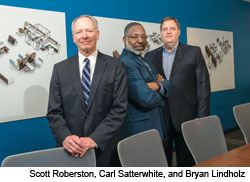 “The message was clear,” Lindholz recalls. “They wanted their supplier base to match their customer base, not what it was in the past.”

P&G wanted minority suppliers to grow in scale and scope through joint ventures, strategic alliances and mergers and acquisitions to bring greater diversity and inclusion to its supplier network.

Satterwhite and Robertson took the message to heart and met the next day at a Bob Evans Restaurant. Robertson says they decided: “It’s the right thing to do. Let’s do it.”

Over that summer with the help of attorneys Calvin Buford, then on loan to the chamber’s MBA, and George Vincent, now partner in charge of Dinsmore & Shohl, they put together RCF Group.

Their partnership agreement was a mere seven pages.

Says Robertson, “Both Calvin and George told us it doesn’t matter what we put on paper it’s how you treat each other [that matters].”

Giving up total control of a business for a piece of a shared vision isn’t something every businessperson is willing to do, say Satterwhite and Robertson.

“As a business person,” says Robertson, “it wasn’t the percentage of the pie I owned, but how big can we make the pie. We collectively believed we could grow the business.”

RCF has grown more than three times its initial size, completing its first two acquisitions in 2014 of two Cleveland area office furniture distributors. With its growth platform in place, RCF is looking for more acquisitions or partnerships with local distributors particularly among owners of older companies looking for exit strategies.

Another aspect of RCF’s success has been the ability of Satterwhite and Robertson to give back to the community.

Both have been actively involved in a variety of community activities.

This month, Satterwhite, who is active in a number of minority supplier groups, is ending his two-year term as chairman of the board of the United Way of Greater Cincinnati, just the third African American to serve in that role, and Robertson is stepping down as co-chair of the influential Cincinnati Regional Business Committee, an organization he’s headed since its founding.

At the same time, Robertson will take on a new role as chair of the leadership council of the Chamber’s MBA.

“What’s unique about us is we all set out to be the best company first that just happened to be a minority business enterprise, not an MBE that could do business,” says Lindholz.

Satterwhite says that was validated in 2013 when RCF was one of a handful of suppliers recognized by Jones Lang LaSalle, the global real estate professional services firm, not as a minority supplier but as a best-in-class provider of customer service.

Robertson, Satterwhite and Lindholz have another thing in common. All three learned the business from the ground up, starting on the loading docks.

Satterwhite says, “The magic wasn’t that I was an African American in a partnership with Caucasians. The magic was in our backgrounds.”

RCF is regularly approached by other minority-majority partnerships wanting to duplicate their success, usually to win a specific contract requiring supplier diversity.

Those types of short-term goals usually don’t succeed, Satterwhite says. “You really want to create a partnership of lifelong opportunity.”