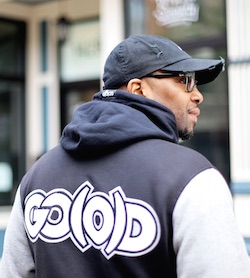 OTR business owner shares his thoughts on the protests, vandalism and how to move forwardDavid Holthaus Donny Harper is a former teacher in Cincinnati Public Schools whose passion for music and clothing led to a change in careers. In 2014, he started Go(o)d Company Apparel and moved to an Over-the-Rhine storefront on Race Street in 2018. He moved one street over to Vine in March, just as the pandemic led to a shutdown of retailers and much of the economy. He was preparing to reopen when protests erupted, some violent, in the neighborhood. We sought his take on the protests as both a black man and the owner of a small business in Over-the-Rhine.

Cincy Today: What do you think of the protests?

Harper: It’s unfortunate but necessary at the same time. I can relate to the anger and frustration. But at the same time, having a business in OTR, it’s a double-edged sword for me. I have a black-owned business and I’m a black male. I don’t want my establishment to be vandalized, but it seems the only way we can bring attention on a global scale is to vandalize, is to, kind of, riot.

Cincy Today: There’s seems to be more intensity around the protests now. Why do you think that is?

Harper: People say, “What about when a black kills another black, where’s the outrage?” Y’all have to listen to what you’re saying. We don’t have to protest when a killer goes to jail. We’re talking about a person who murdered somebody not going to jail.

We don’t want anyone to be murdered, but if I shoot someone in the black community, the police are looking for me. They going to come get me, and I’m going to go to jail.

Cincy Today: Do you think the violence and vandalism is justified?

Harper: We have already protested, years and years ago. We said, “Hey, it’s not fair, it’s not right,” and no one seemed to hear the cries of the injustice. And so it’s like, “Let’s knock a little harder on the door.” That doesn’t work and it’s like, “Let’s ring the doorbell,” and then, “Let’s kick the door down,” and now it’s a problem. But why didn’t you hear us when we tried to do it nicely for a decade?

Cincy Today: How is your business doing?

Harper: We hope to open this month. We pushed it back with the vandalism. The beginning of March was when we opened but two weeks later, COVID-19 came and shut us down. Two weeks after I moved to the very spot I always wanted to be at [on Vine], we had COVID-19. The governor said, “OK, you can kind of start opening,” then it was the protests.

I’m definitely being affected. It’s been a challenge. I’m online so people can go online and place orders. But it’s nothing like the money I could make if I was open and getting all that foot traffic.

Harper: We need more diversity to cry out for us, alongside us. If we can all join together and step up and say “Listen, this is wrong. What must we do to bring about a change for humanity?” I think that will be a start.