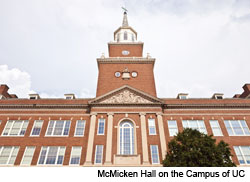 What happens when a college president retires?Peter Bronson Here’s a cold case for Columbo: A university president goes missing almost overnight. For no apparent reason, he walks away from his $451,000 salary, extravagant benefits, free $2.7 million condo and his celebrity.

The only explanation: “personal reasons.”

It happened six years ago. Just like that, University of Cincinnati President Gregory H. Williams quit in September 2012, just as the school year was about to begin.

When he was hired in 2009 from a list of more than 100 applicants, Williams was billed as a superstar. His book, Life on the Color Line: The True Story of a White Boy Who Discovered He Was Black, was applauded by Oprah, Tom Brokaw, Larry King and Ted Koppel. There was talk of a movie deal.

UC Magazine described him as a hero of diversity, which he called “the future of the world.”

“My goal is to continue the great momentum that has been established at this great institution and to move the university forward as quickly as possible,” Williams said then. “We have a great story to tell, and we need to get the word out. We’re going to be the big dogs.”

But when the biggest dog ran away, there were no posters on telephone poles. There was no story to tell. No word got out. No amber alert. Just “personal reasons.”

The local media dropped the story like a radioactive rock. The UC Board of Trustees was leak-proof. The Cincinnati Enquirer seemed uninterested. (The urban weekly CityBeat speculated that having the Enquirer’s publisher on the UC board had something to do with that.)

But UC is Cincinnati’s biggest employer. It is a public institution, supported by taxpayers, who supposedly have a right to know what happened. Was he fired? If so, why?

Six years later, board members and UC officials interviewed by Cincy Magazine are still not talking for the record. But off the record, a story emerged.

There was a stormy meeting with Williams, called by a group of board members who confronted him about their increasing dissatisfaction. Realizing his support had evaporated, he resigned.

Board members and university officials said the sudden “divorce” was not as sexy as some rumors claimed. Williams had simply worn out his welcome by telling and re-telling his life story ad nauseum. He used his new stage to shine a spotlight on himself, instead of the university. And he stumbled into political minefields wearing snowshoes—choosing sides against powerful board members and donors, who ran out of patience.

Williams “is currently an independent trustee on the board of certain of Franklin Templeton’s U.S.-registered mutual funds,” according to a spokesperson.

So why the secrecy?

Because university presidents live in the ultimate campus “safe zone,” where the worst that can happen is to quietly resign with a platinum parachute. They are seldom fired like ordinary mortals.

After Williams quit, Fox 19 reported on his “extravagant lifestyle” that included limos on the UC credit card. Chauffeured limos may fit New York and L.A., but not Cincinnati. Yet even that was low rent compared to his transition agreement, which also got little attention. According to the document obtained from UC:

• He was allowed to stay in his luxury condo, rent free, for four more months.

• He was given “all employee benefits available to tenured faculty,” and a salary of $255,000 for two years to teach a class. But he was not required to teach anything.

• And after not teaching for two years, he was given another lump sum payment of $300,000 as “a buyout of Dr. Williams’ tenured faculty position”—thank you for not teaching.

Not including benefits such as health insurance, the severance package topped $1.5 million. The only thing more lucrative than being UC’s president was quitting as UC’s president.

Here’s the part where Columbo rearranges his rumpled raincoat, scratches his head and says, “Wait a minute. One more question. Isn’t it a bit unusual to hit the jackpot after you get canned?”

Not in the alternate universe of higher education.

According to the most recent statistics from the Chronicle of Higher Education:

• The highest paid college president since 2010 was Gordon Gee at Ohio State University: $6 million. Gee “retired” in 2013 after he embarrassed OSU—again—by insulting another ethnic group. He moved to West Virginia, which matched his OSU base salary of $800,000.

• A dozen university presidents in the U.S. make more than $1 million a year.

• Xavier University President Fr. Michael Graham: As a Jesuit, he receives no salary.

Base salaries are only the crust of the pie. The filling—free housing, car allowances, skybox benefits, retirement contributions, travel, insurance and lavish expense accounts to wine and dine donors—can easily double a college president’s salary.

And the bigger they are, the softer they fall.

At Michigan State University, President Lou Anna Simon was forced to resign after a university doctor was caught molesting women on the gymnastics team. Her severance package guaranteed $750,000 the first year, and more than $560,000 annually after that, plus office space, secretarial help, game tickets and other perks.

Beverly Davenport, who was an interim president at UC and was considered for the job permanently, was hired as president of the University of Tennessee Knoxville—then fired after a year for poor organization, communication and business skills. Her penalty was to join the faculty at a salary of $1.7 million over four years.

When Penn State President Graham Spanier was fired, he was given $1.2 million and a $700,000 “sabbatical”—maybe to study the legal liability of football coaches who molest kids.

If university presidents are more valuable to society than pop stars, NFL linebackers and CEOs of industry, it’s hard to see how. In any case, Economics 101 says CEO salaries are determined by a free market—while college presidents are paid with fiat currency: Other People’s Money.

And that comes from students and families who go deep into debt to pay tuition so that fired presidents can take $700,000 sabbaticals and be paid $300,000 to not teach any classes.

Last year, the average student debt was about $39,000, up 6 percent. Two thirds of graduates leave with a backpack of debt.

One UC trustee said Greg Williams had a hard time finding another job after he was forced out. Whatever the reason, the scandal was not how he suddenly quit, but the way Williams and others like him are paid so much to go away.

Families spend $50,000 to $100,000 for six years of tuition to buy a four-year diploma that is good for wrapping a burrito in the job market, while university presidents are paid millions—even after they get fired.

Even Columbo couldn’t figure out how they get away with that.