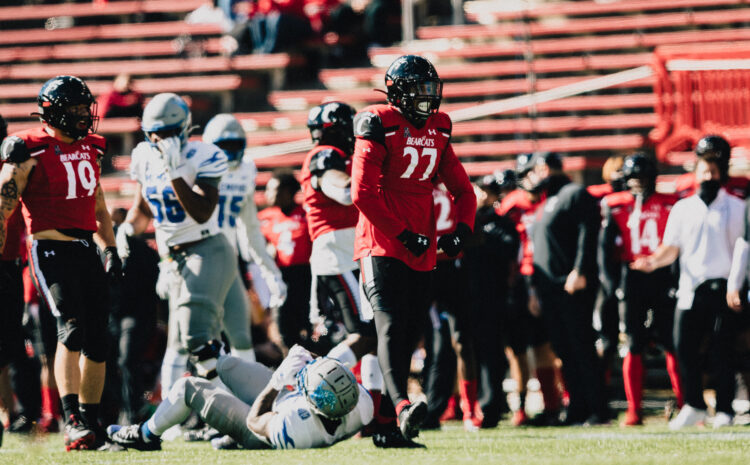 Could they make the College Football Playoffs?

The University of Cincinnati cruised to a 38-10 victory over the Houston Cougars on Friday to further cement their status as the overwhelming favorite to win the American Athletic Conference (AAC). With just four games remaining, it leaves the Bearcats faithful dreaming of a postseason run.

Unfortunately, as a member of the AAC, the Bearcats are not part of a Power 5 conference. This means it is very difficult to convince the College Football Playoff (CFP) selection committee that they are deserving of one of the prized four spots, especially compared to more historically prestigious programs. The committee often cites a poor strength of schedule and inconsistent play (read: one loss or close wins) as a reason to ignore the smaller programs.

To make the CFP, head coach Luke Fickell’s team must end the season undefeated, play dominant football and hope higher ranked teams lose. The Bearcats are ranked No. 7 in the nation.

Assuming UC can continue their winning ways through early December, they just might be harder to ignore this year.

An undefeated season will mean they finished 10-0, playing more games than some programs will have all season. Although this can work against them, it gives UC more time to impress the committee with consistent play.

They also have a top defense statistically. The Bearcat defense is averaging less than 12 points allowed per game. This rivaled No. 2 Notre Dame (10.3 ppg allowed) before their high-scoring double OT win against No. 4 Clemson last Saturday.

UC can only defeat the teams in front of them and, so far, they’ve beaten two of their most difficult opponents in UCF and SMU. They also defeated Memphis, a program that bested the Bearcats twice last season.

Should the Bearcats finish the regular season ranked as one of the top four teams in the land, they will play in either the Rose Bowl Game or Sugar Bowl on New Year’s Day. The national championship game will be played on January 11 in Miami, Florida.

This will be a very difficult and improbable task, admittedly. But if 2020 has taught us one thing, it’s to expect the unexpected.