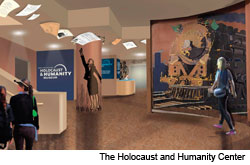 The new museum will have three times the exhibition space of its former home on Montgomery Road and will become the only Holocaust museum in the U.S. with an authentic connection to its site, as a majority of the approximately 1,000 people who came as refugees or survivors to Cincinnati arrived by train at Union Terminal, according to Executive Director Sarah Weiss.

“In many ways for the survivors having their stories and the history preserved and shared in that setting is kind of a homecoming,” Weiss says. “The location is incredibly fitting.”

Renamed the Nancy and David Wolf Holocaust and Humanity Center to honor the lead donors in the project’s $12 million capital campaign, the 7,000-square-foot museum is expected to greatly increase its audience, as Union Terminal receives more than 1 million visitors per year. The extra room will also allow for outreach programs, educator workshops and world-class traveling exhibits.

Originally founded by Holocaust survivors and opened in 2000, the center aims to educate the public about the Holocaust through personal stories from survivors and artifacts from the era, but also display the human spirit and inspire visitors to be a positive change in current society.

“[The founders] encouraged us to not only think about preservation, they also wanted their experiences to be used as a warning to future generations and a lesson for us today,” Weiss says. “Our work is really a mission.”

The new museum will welcome visitors with a lobby displaying graphic comic vignettes that will later come to life as testimonials from local survivors in an interactive exhibit.

Highlighting the museum’s mission, another interactive exhibit named the Humanity Gallery will display individual moments—some with links to Cincinnati—that will serve to inspire visitors by reminding them that one person or action can make a big difference.

The installations are currently being created in Philadelphia and will soon make the trip to Union Terminal, where construction is wrapping up on the new lower level space.

A private opening is scheduled for Jan. 26, with a public opening the next day. A ceremony will feature surviving refugees making a ceremonial walk down the steps from the train terminal to the new museum and a performance by the Cincinnati Ballet.