The Health Gap goes  “bottom up” to improve lives.

For Girl Scout Troops 41096 and 41873 in Hyde Park, the annual Health Expo sponsored by the Center for Closing the Health Gap isn’t just another activity, it’s a key part of their leadership development, says Maria Cholak, troop leader.

The 11th and ninth grade girls in the two troops spend their year developing an activity for the expo that engages children and adults and furthers the event’s theme.

At this year’s Expo, for example, the older girls solicited experiences about racism for a Health Gap mural and the younger girls engaged 306 adults and children in a self-esteem activity.

“I have to say we appreciate the opportunity the Health Gap has given us. I feel my girls have been able to have a measurable community impact,” says Cholak, who has led both troops since they were in kindergarten at Kilgour Elementary School.

Now in its 13th year, the Center for Closing the Health Gap is a nonprofit committed to raising awareness and eliminating racial and health disparities across Greater Cincinnati.

The Health Expo, which drew an estimated 10,000 people to Washington Park at the end of April despite a delayed start due to rain, is the center’s signature event, but it couldn’t happen without efforts of some 500 volunteers such as the Girl Scout troops and area hospitals that provide more than 20 different health screenings, says Renee Mahaffey Harris, the Health Gap’s chief operating officer.

The Health Gap uses what Harris calls a “bottom-up” approach to shaping its community health interventions. 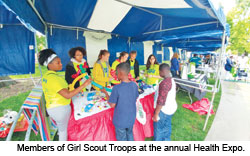 “It is more effective,” she says. “Top-down approaches have not resulted in improved outcomes in vulnerable people. When someone is delivering a program to you, you don’t have a stake in it and therefore the sustainability isn’t good. …When the program ends, the effort ends.”

With a bottom-up approach, she says, “you are engaging the very people receiving the solution. Research demonstrates there’s a sustainability of those behaviors that have been changed. Attitudes are improved. Those kind of more systemic changes will have a greater impact on the health disparities.”

The other driving force in the Health Gap’s work is the social determinants of health, such as behaviors, the environment, education, housing and transportation.

“When we think about health, we usually think about going to the doctor or receiving care but that only represents 20 percent of the health equation,” she says. “The other 80 percent speaks to our behaviors and the impact of the environments we live in.”

The Do Right Health Campaign, launched in 2008 to combat family obesity, has reached more than 20,000, the Health Gap says. It offers an array of programs such as an after-school program to encourage children to eat right and exercise, a certificate program to train neighborhood volunteers in proper nutrition and an effort to encourage neighborhood stores to provide healthier food and drink options.

“I’ve been here almost 10 years and I’ve seen the data and testimonials,” she says. “When people understand even simple things can have a big impact on their health it really opens their eyes.”