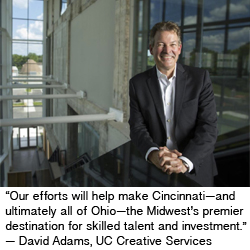 The 1819 Innovation Hub in Uptown is looking to have an impact on the community at large.Terry Troy What’s the difference between an Innovation Hub and an Innovation District? How about $2 billion in research and real estate development, 20,000 new jobs and up to $3 billion in annual economic impact—and that’s just for starters.

“To compete and win, we must invest in research and talent while establishing vibrant, amenity-rich communities to realize our long-term vision of making Ohio the best place in the country for tech and life science jobs,” says J.P. Nauseef, JobsOhio’s president and chief investment officer. “We applaud UC, Cincinnati Children’s and the many partners who have stepped up and made significant new investments to drive these outcomes.”

“It is great to see our ‘Next Lives Here’ vision truly resonating with thought leaders across Ohio,” says UC President Neville Pinto. “This historic investment in our academic mission only reaffirms the world-class talent and immense promise of our faculty, staff and students. I want to extend a special thanks to my leadership team for partnering with JobsOhio to see this endeavor to success.”

The massive investment places Cincinnati and the whole Tristate area in a leadership position in terms of innovation, attracting talent and corporations, and ultimately building the city’s population. It will also serve as a blueprint for future economic development across the state, according to JobsOhio officials.

“The Cincinnati Innovation District is the next big thing for Cincinnati’s growth,” says Cranley. “This partnership among the state, JobsOhio, the city, the University of Cincinnati and Cincinnati Children’s Hospital will pay dividends for decades to come.”

“In partnering with the University of Cincinnati and Cincinnati Children’s to create this Innovation District, we are investing in opportunities for students and incumbent workers to build a successful career in Ohio, while unleashing the research and innovation happening on our university campuses and hospitals to help drive job creation,” says DeWine.

“The three most important elements to developing a vibrant, modern economy are innovation, talent and investment,” adds Husted. “[The] announcement represents an aggressive effort to build our capacity and align these resources to create a world-class innovation district in Cincinnati. Great ideas must find a way from the lab to the marketplace if they are to improve the quality of life for the public and create jobs and economic opportunity. This innovation district will make this process faster and more effective.”

Future investments from JobsOhio will go toward placemaking initiatives within the Cincinnati Innovation District, which encompasses the innovation assets of UC, Cincinnati Children’s and neighboring research-focused institutions. JobsOhio projects its investments, alongside those made by UC and Cincinnati Children’s, will result in the creation or attraction of 20,000 high-skilled jobs to Cincinnati and an annual economic impact of between $2 billion and $3 billion.

“Our leaders in Columbus have been watching closely as we’ve implemented the university’s innovation agenda,” says David J. Adams, chief innovation officer at UC. “It reinforces what we already knew: Our approach to innovation works. They recognize that UC has drawn up the blueprint for establishing nationally competitive innovation districts. Our efforts will help make Cincinnati—and ultimately all of Ohio—the Midwest’s premier destination for skilled talent and investment.”

The University of Cincinnati developed an innovation district blueprint through the creation of the 1819 Innovation Hub and the developing Digital Futures complex. These sites have already attracted Fortune 500 companies, mid-sized companies and generated significant start-ups. In only its second year, the Innovation Hub’s Venture Lab accelerator is on pace to grow its startup dramatically.

Clearly, the UC 1819 Innovation Hub has become an economic engine that strengthens the entire Ohio economy. The storied history of UC’s innovation expertise is long-standing, making the vision of attracting even more businesses and the talent to serve them a reality.

A significant part of the initiative announced in March is the acceleration of the number of STEM graduates, which is also very important to organizations looking for new locations, says Adams.

“The No. 1 issue we hear from companies looking for locations is access to talent,” says Adams. “We live in an environment today where talent is drawn to innovation and that companies are drawn to locations that have talent. So the 1819 Innovation Hub was our first start into the development of an innovation district, which we had in our vision for some time.”

While it’s clearly serving the Greater Cincinnati area, it’s a district that is as much about mindset as it is about firm geographic borders, adds Adams.

“We will curate this project over time to define how this will look,” he says. “That’s why we are not looking at firm boundaries. We are keeping this loosely defined because it will continue to evolve. Instead of constraining it, we are looking at this to be unconstrained and evolving as we move forward.”

That includes the constraining definition many people place on the concept of innovation itself. While the 1819 Innovation Hub has done a lot to create startups, it’s also helped numerous mid-market companies, as well as Fortune 500 companies such as Kroger and Procter & Gamble. You can add Fifth Third Bank to that list, and others are sure to follow.

“Whether it’s a startup, mid-sized or a Fortune 500 company, all companies today are facing similar problems,” says Adams. “Innovation is not just limited to startups.”

If you think about the pace of change of today’s business environment, Fortune 500 companies must redefine their organizations to be more entrepreneurial in order to solve problems, says Adams, “which is no different than someone trying to start a business.

“By creating spaces for them to interact, it also creates new opportunities for organizations that might not even talk to one another.”

A leading provider of technology solutions for merchants, banks and capital market firms globally, FIS announced earlier this year that the company plans to solidify its presence in Cincinnati as a Strategic Technology and Innovation Campus at the former corporate headquarters of Worldpay, which was acquired by FIS more than a year ago. It also recently opened a space at the 1819 Innovation Hub.

As chief operating officer, Stephanie Ferris leads a global team that drives FIS corporate strategy, marketing, communications and mergers and acquisitions, as well as portfolio analytics optimization. With a career that spans more than 20 years, Ferris is a transformative business leader who knows the importance of the Innovation District in terms of attracting and retaining talent, as well as creating synergies with other companies located within the Innovation District.

“We’re pretty excited about it,” says Ferris of the company’s new space at the Innovation Hub. “It’s a new, current and an innovative space right on the UC campus that gives us the opportunity to actively bring in students to work with our teams on developing new products or working on processes.”

So how is that different than bringing students out to the Mason area where the company is headquartered?

“They see us every day,” answers Ferris. “It really is important to be seen on campus, to be seen as an innovative company and as a place that is technology enabled.”

That’s not only true for global companies such as FIS, but other major organizations such as Kroger, P&G, Cincinnati Bell and Cincinnati Financial, she adds.

“The space also gives us the opportunity to network with those companies, to potentially co-develop some things together,” Ferris says. “We haven’t gotten there yet because our space is so new. But we are very excited about the opportunities moving forward.”

Being a part of the Innovation Hub has also changed the way the company works because of the way its space is configured.

Clearly, the 1819 Innovation Hub is not only a place for aggressive innovation, but also an economic engine that will drive the entire economy of Cincinnati and the Tristate.

“The future is now and many companies are well into their future building,” says Jill P. Meyer, president and chief executive officer of the Cincinnati USA Regional Chamber. “What 1819 provides is both the push for some to enter that phase, but also a place to foster additional, faster innovation for those who are pursuing it.

“Place matters; before 1819 we were missing it. That Cincinnati now has this focused Innovation District tells the rest of the world that this is a strong place to build your future—whether you are a student, a researcher, a scientist or business leader. 1819 has created that initial, critical convergence where a major urban Research-1 university, medical community and businesses all come together by design to create that which none could create on their own.”

The Innovation District has been a missing piece of Cincinnati’s business landscape, adds Meyer. That the area now has this kind of investment and energy happening at the core of the Cincinnati MSA serves as a strong signal that the area is building its future economy in a strong sustainable way that will enable continuous growth.

“It’s the new economy springing to life in a visible way for all not only to see, but join,” Meyer adds. “It’s an enviable asset that not all communities enjoy. It is a differentiator.”

This opinion is shared by the city’s economic development team as well.

“The Innovation Hub was the first major new investment within the corridor and is like a spark that is creating a buzz and interest from other employers looking to locate in the surrounding development opportunities now beginning to come out of the ground,” says Markiea Carter, interim director of the Department of Community and Economic Development for the city of Cincinnati.

“The 1819 Innovation Hub allows Cincinnati and our region to have a true and viable place for individuals and companies wanting to share their ideas and develop cutting-edge technologies that will keep us competitive against other competing regions within the Midwest.”

As well as the rest of the world.