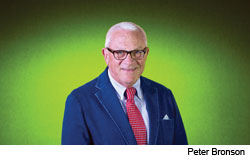 Peter Bronson The greatest superhero in the universe is: A.) Superman; B.) Clark Kent; or C.) a 16-year-old student at Covington Catholic?

The answer, for now, is B.—the mild-mannered reporter, Clark Kent. Superman is allergic to kryptonite, but reporters are invulnerable. The Supreme Court’s Times vs. Sullivan decision of 1964 is an invisible force field that lets almost anyone who claims to be a journalist—virtually anyone who can type or tweet—get away with reckless, damaging, false and malicious libel.

But C., the 115-pound teenager Nicholas Sandmann, may have a chance to take down the media’s magic shield, which could make him the most powerful superhero.

In case anyone missed it, on Jan. 18, a mob of racist boys from Covington Catholic High School, wearing hateful Make America Great Again hats, surrounded and smirked at a Native American elder and Vietnam veteran who was peacefully banging his drum and chanting a tribal song at the Lincoln Monument…

Wait. Stop the presses. That’s not what happened at all. In fact, video showed and an independent investigation confirmed that the boys did nothing wrong. They were minding their own business when the drum-banging activist, Nathan Phillips, pushed into their crowd and shoved his drum into the face of Sandmann. He claimed the students yelled “build that wall” and blocked his path. All untrue, but amplified by the media megaphone.

The story was based on a misleading 59-second video posted on social media that did not show what Phillips did, and also failed to show the true racists, a crowd of Black Hebrew Israelites who hurled profane and vicious insults at the students.

Yet for three days, The Washington Post and other social and mainstream media continued to smear Sandmann and the other students with false stories that could have easily been corrected by checking more complete videos of the incident that were available online.

Sandmann was targeted because he was white and wearing a MAGA hat he bought as a souvenir on his first trip to Washington.

The Post ignored basic standards of journalism “to advance its well-known and easily documented, biased agenda against President Donald J. Trump by impugning individuals perceived to be supporters of the president.”

Sandmann was subjected to “public hatred, contempt, scorn obloquy and shame,” “severe emotional distress,” “permanent harm to his reputation” and a lifetime of “constant concern over his safety and the safety of his family.” He and other Covington Catholic students, including some who were not even on the trip, were threatened and slandered.

A legal team led by L. Lin Wood of Atlanta has also sued CNN for $275 million, and many more lawsuits may follow, including newspapers “farther down the food chain,” such as The Cincinnati Enquirer. The lawsuit against The Post seeks $50 million in compensatory damages and $200 million in punitive damages.

And that’s a problem, according to some legal analysts. “The conventional wisdom is that no plaintiff can win a defamation case in any matter that is of public interest,” writes John Hinderaker of the Power Line blog—who supports Sandmann.

Times vs. Sullivan declared open season on public figures by requiring them to prove “actual malice” by the press, meaning “knowledge that it was false or with reckless disregard of whether it was false or not.”

And courts have expanded public figures to include anyone the press drags into their spotlight. It’s a Catch 22—Sandmann could be defined as an “involuntary public figure” because the media made him one.

Just like Richard Jewell, the client who propelled Wood to national stature on media libel. The security guard at the 1996 Atlanta Olympics found a backpack of pipe bombs, alerted police and helped evacuate the area, saving many lives.

But reckless and false media reports painted him as “the Olympic bomber.” His life and reputation were ruined. He won settlements from NBC and CNN, but his libel suit against the Atlanta Journal-Constitution was blocked because the courts said he became a “limited purpose public figure” by talking to the press. That definition of public figures means almost every libeled victim has to prove “actual malice,” which is almost impossible.

But Supreme Court Justice Clarence Thomas recently said Times vs. Sullivan was an unconstitutional distortion of the First Amendment. Justice Brett Kavanaugh might agree. If so, Sandmann vs. Post might be the case to curb libel laws that have become an unrestricted hunting license to destroy nearly anyone.

Wood says, “Justice Thomas’ keen observations could not be more timely. The mainstream media’s 24-hour news cycle depends on the actual malice standard to dodge responsibility, and the actual malice standard permits corporate media to rush out sensational, false stories to generate profits and consolidate media influence and power. Both the victims of the false stories and society at large suffer as we are now inundated with false, poorly investigated and questionably sourced information.”

Other businesses are held accountable by product liability lawsuits. Why should the media have immunity for exploding Pinto stories? In an era of click-bait sensationalism, lynch-mob social media and vanishing standards of editing, libel laws from 1964 look as archaic as dial phones and telegrams.

The press is now controlled mostly by an oligopoly of corporations—Amazon, Time-Warner, AT&T, Disney, Microsoft, Google, Facebook—often recycling counterfeit “breaking news” from Twitter, blogs and political activists, as they did in this case.

Wood says, “Since the Supreme Court’s ill-fated [Times vs. Sullivan] decision, the press has splintered into a series of echo chambers, and the public’s righteous distrust of the press has spiraled to unprecedented levels. The press will again thrive, and public trust will be restored, if and when the Supreme Court limits or abolishes the ‘actual malice’ era.”

Cleveland media lawyer David Marburger has won “a slew of these cases,” including a successful U.S. Supreme Court defense of the Cleveland Plain Dealer. He calls the Sandmann libel suit “ridiculous.”

“It all boils down to one question: Did you fail to exercise reasonable care to determine the truth?” He says the answer is yes. “The media have a right to make mistakes. They are not under any duty to shut up until they find a better video.”

He believes Sandmann can be defined as a public figure who will have to prove actual malice, because “he plainly chose to behave in a way that was controversial.” Even compensatory damages are doubtful, he says. “I’m very skeptical that anything the institutional press said would cause all that grief he experienced. I don’t doubt that he has had all sorts of problems, but that’s just the way people are today on social media.”

But a jury of angry parents in Covington’s U.S. District Court might see it differently. Sandmann’s Kentucky lawyer, Todd McMurtry of Fort Mitchell, says all but one of 500 comments have been positive.

The more complete video supports the lawsuit argument that “Nicholas was startled and confused” when Phillips accosted him, and “was concerned that turning away from Phillips might be considered a sign of disrespect.” Where the press cried “smirk,” others see an awkward, frozen smile on a scared kid.

And if discovery shows that reporters and editors did know or suspect that their story was false, “actual malice” could be proved.

Even without punitive damages, he could win $50 million from The Post, and more like it from other newspapers, networks and social media. His lawsuit checks the boxes for media malpractice: reckless disregard, biased reporting, refusal to correct or apologize, false and defamatory accusations, negligence, permanent damage…

The media think they are above the law, Wood says. “If they can do this to a 16-year-old, we’re all at risk.”

In a backward way, Sandmann vs. Washington Post might even save the media from itself. It’s no coincidence that as accountability has evaporated, trust in the press has cratered. If the courts don’t do something, the government might restrict freedom of the press, as some Republicans and Democrats have proposed with growing public approval. Accountability could restore public trust.

As for claims that the lawsuit chills freedom of the press: When a kid gets death threats for wearing a MAGA hat because the media falsely labels him as a racist, that chills free speech for everyone.

Nicholas Sandmann will be a superhero if he restores one simple truth from Justice Potter Stewart in 1966: “The right of a man to the protection of his own reputation from unjustified invasion and wrongful hurt reflects no more than our basic concept of the essential dignity and worth of every human being—a concept at the root of any decent system of ordered liberty.”