On a warm June evening Jim Bauer and his fellow football coaches—Doug Keller, Ed McMasters and Josh Beninghaus—shared beers and food at Take 5, a Cincinnati bar and grill. A College World Series matchup between TCU and Louisville played on one TV, and the NBA Draft played on another, but the four men could care less.

They were too wrapped up in reliving the previous fall when they coached the Oak Hills Highlanders Sixth Grade Silver Youth Football team to an undefeated season and won the 11U Elite-All Star American Division National Championship in Knoxville, Tenn.

In times where conversations of “super teams” dominate national sports headlines, last year’s sixth grade Highlanders were the epitome of one. Up-and-down the depth chart, different players assisted the team in reaching heights no Oak Hills team had ever seen before. “You can take a look at the stats, everybody was involved [offensively.] You can’t say ‘Key on number 22 and we’ll shut these guys down,’ or ‘Put everybody in the box and they can’t win,’ because left, right, in, out, in the air, it didn’t matter,” Bauer says, remembering the Highlanders’ high-powered offense.

The coaches established four goals with the 22 players at the start of the season: to win the GMYFC league, win the GMYFC Super Bowl, win the Southwest Ohio Championship and to win the national championship in Tennessee. While they accomplished these with flying colors, there were other goals that Bauer and his staff discussed during their pre-and post-practice meetings that had nothing to do with football or winning championships.

“At the beginning of the year we would get together and make sure our intentions were correct. Which were, we did say we were going to win, but we’re not football coaches, we’re teaching life to kids through football. We taught them what it takes to win, what it takes to have respect for their parents, respect for their coaches, but also to know that there’s a score card, a score card in life as well,” Bauer says.

All 11 coaches understood their responsibility to the kids. “The old saying ‘Never give up,’ that’s what we’re teaching them, not NFL schemes,” says Beninghaus.

A football skill that also taught the young men a lesson was when they were given knowledge and freedom, at times, to choose the plays being called, something unheard of when coaching kids only 11 years of age.

“In practice when we went team-offense, I would say ‘I’m not calling the offense, you guys call it because there is going to be a day where I’m not here, you guys do it.’ And then I would make each kid call a play, but [they couldn’t] call it for themselves. You can’t be selfish; you have got to give it to somebody else first,” Bauer says.

This skill proved to be crucial throughout the Highlanders’ championship run. Oak Hills played the West Chester (Cincinnati) Outlaws in the national title game and after scoring a touchdown with 40 seconds left, Bauer’s team found themselves down by two points, 14-12, and in need of a two-point conversion.

Bauer went out and called a play, but before he walked off the field quarterback Jaxon Schrieber had a suggestion of his own—a “pop pass” to the tight end. This was a gamble. Luke Conway, the team’s pass- 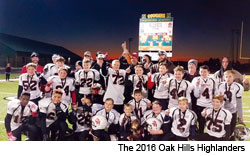 catching tight end, had not played a down of offense the entire game, but Schrieber was given the green light. “We thought, ‘What a great idea since we had seen during film study that they were vulnerable to that type of play,’” says McMasters, the team’s film and scouting mastermind.

Then one of their most critical plays of the season occurred. Schreiber took the shotgun snap from Elliot “Beef” McMasters, rolled out left and connected with Conway on a pass in the end zone, sending the championship game into overtime. The Highlanders ultimately won the game 22-14.

That moment and the win itself were surreal for the coaches, players and parents. “I have other children that play sports, but to watch that team and the way the kids pull together, and the coaches, and the parents and they’re just like a big family. Once they won, I’m crying, the mom next to me is crying, everyone is crying, it was amazing,” says Jessica Norman, mother of Caleb Hassinger, who was described by McMasters as “the littlest guy on the team and perhaps one of our hardest hitters.”

The familial relationships between everyone closely involved with the team made it easy for the coaching staff to teach their life lessons to the boys, and to be there for them when needed. Norman, a single mother, is grateful for the way her son was cared about. “[My son] couldn’t believe that people called strangers to him at the beginning were that supportive of him and never let him down. I can’t thank them enough for doing that for him and he is very, very close with them.”

Now, as the players prepare for seventh grade football and eventually begin high school football, Bauer and the rest of the guys hope they have them not only well-prepared for life, but ready to do something that could prove to be challenging: stay together.

For Cincinnati high schools, it is hard to keep their kids from going to St. Xavier, Elder, Moeller and La Salle—football powerhouses that have all won multiple state championships. Like the New York Yankees under George Steinbrenner or Alabama under Nick Saban, these schools don’t go through rebuilding periods; they reload with top-talent instead. This makes it hard for Oak Hills and other public schools in the area to keep pace. 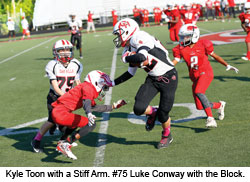 “That was another driving factor for us was to: let’s do something that everyone can hang onto and they’ll stay with. Otherwise kids are going to go off in their own different directions. We hope that we can bring some longevity,” says Bauer, an Oak Hills alumnus.

Jessie Hubbard, the head coach of last season’s sixth-grade Edgewood youth football team—the Highlanders’ archrival—was a 22-0 casualty to Oak Hills in the 2016 Southwestern Ohio Super Bowl, and he believes they have a tough road ahead.

“You walk through La Salle’s facility and there’s guys in the pros, there’s guys who played at Ohio State, there’s guys that played at Michigan. It’s going to be difficult, especially with the location where Oak Hills is because it’s right in the heart of all that, where the kids don’t really have to travel that far to get to La Salle or Moeller.”

Norman, however, is optimistic the kids will stick together. “Because the families and the kids are so close, I am in full belief that it is going to happen.”

If the core players of the Highlanders stay together, the future of Oak Hills High School football, which finished 4-6 last season, could be bright. “What this group of young gentlemen accomplished was amazing. Their unity and coach-ability gives our entire program something to look forward to,” says Oak Hills High School head coach Kyle Prosser.


Keller, who will be the head coach of the boys this coming season in seventh grade, recalls a specific conversation he and Prosser had last season. “He came up to me and said ‘I tell you right now, if we don’t win at least two state championships with this team,’ … He said ‘We have to keep these boys together.’”

Big decisions will come soon for each player apart of the national championship winning squad, but for now the Oak Hills boys are gearing up for their seventh-grade season.


“They’re pumped. The kids are pumped up about this,” Keller says.