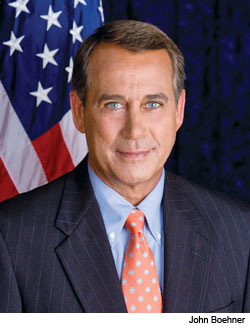 But he’s not smoking it… yetPeter Bronson Three things that hippies never imagined they would live to see in their wildest LSD-peyote-hashish hallucinations that have happened in recent years:

– Pot is now legal for medical use in 33 states and for recreational use in 11 states—yet somehow revenues are as underwhelming as a bong of seeds and stems.

– Willie Nelson announced that he has stopped smoking pot.

– And one of the biggest supporters for legalized cannabis is a conservative Cincinnati Republican, former Speaker of the U.S. House John Boehner.

It’s unlikely that pot sales slumped because Willie quit toking. But now we at least know how Boehner got high on pot. And it was not by smoking it.

“Nope, I’ve never used the product. But that doesn’t mean I won’t,” he says. “My older friends in Florida swear by it.”

When he was approached in 2018 to join the board of one of the biggest companies in the cannabis industry, Acreage Holdings, he says his first reaction was, “I wasn’t going to do that.”

But after a closer look, he changed his mind. “I watched as state after state legalized medical marijuana, so I knew something was going on out there. People’s opinions were clearly changing.

“After I got out of office [in 2015], I began to talk to seniors who were using CBD oil and cannabis to relieve this or that issue. Then one day I ran into a group of veterans who were very frustrated that the Veterans Administration was prescribing opioids when what they wanted was cannabis, a much better option,” he says.

“The most striking example to me was this Navy Seal I met, who served for 21 years and had 12 concussions. He had a wife and four kids, and the VA wanted him to take more opioids. He told me, ‘I can’t do that and still be a good father and husband.’ After living for 10 years with horrible headaches, he found relief with cannabis.”

Boehner is now a board member for Acreage Holdings, which has licenses to grow legal marijuana in 20 states, including Ohio. And he is chairman of the National Cannabis Roundtable, a group of 15 top companies that operates in 23 states, working to change federal laws that block banking access for the cannabis industry.

Boehner’s family owned a bar in Cincinnati where he worked as a kid. His Happy Hour choice is still a cigarette and a glass of cabernet. But his sudden conversion to legalized pot made headlines.

“Some people were shocked,” he says. “Some were critical. But I would say that 99% of the people I run into every day, someone brings this up and thanks me for speaking up.”

An associate says he is not paid by Acreage Holdings. He says, “There is some money involved, but that had little to do with my decision. The money is not an issue at all. When I went to Congress I sold my business and invested that. My retirement is more than secure.”

It has been reported by Financial Times and others that Boehner stands to make as much as $20 million if Acreage Holdings is sold to Canada’s Canopy Growth—but the sale requires federal legalization in the U.S., where marijuana is a Schedule 1 narcotic under federal law, in the same class with LSD and heroin. For now, that looks as unlikely as Snoop Dog for president.

Boehner takes no position on state and local laws, such as Cincinnati’s legalization without any age limit, or a possible vote to legalize recreational use in Ohio next November. Like most Americans, he thinks “it’s just totally bizarre” that it’s now OK to light a joint on Fountain Square, but lighting a cigarette is social leprosy.

He names three reasons for legalization: Help veterans, fight the opioid epidemic and encourage more research. “All we have to go on is 4,000 years of anecdotal evidence.”

He says some studies show that legal pot reduces opioid abuse, and believes legalization is inevitable. “Polls show 93%of Americans believe medical marijuana ought to be legal, and 65% say recreational use should be legal.”

But there is other research and anecdotal evidence that raises doubts.

The Wall Street Journal reported that sales in California last year were barely more than a third of the annual $1 billion predicted. Investor analyst Motley Fool says the cannabis industry lost $35 billion last year, and losses are likely to continue through 2021.

“The market turned south,” Boehner says, “because it’s saying, ‘When is someone going to make money here?’ The industry is busy reinvesting earnings and expanding the business.” As more sales outlets open, “Real revenue growth could be soon, which is what the market wants to see.”

But claims that legal pot eliminates smuggling and cartels could be a bust. Thanks to taxes and regulations, buyers pay up to 75% more for legal pot, which keeps black-market sales thriving.

And there are serious crime and health concerns. Former New York Times reporter Alex Berenson, author of Tell Your Children: The Truth About Marijuana, Mental Illness and Violence, says legal pot is a big mistake, and he blames his own business—the media—for failing to tell the truth.

In op-eds for the Wall Street Journal, Berenson wrote about how legalization increases crime, aggravates mental illness and suicide among teens and causes increased psychosis-triggered violence.

“That is a failure of journalism to be skeptical,” Berenson says. “After 50 years of Big Tobacco lies, and two decades into a terrible opioid epidemic where we know prescription drug companies lied, I don’t know where we got the idea that people who sell us addictive intoxicating substances will tell us the truth.”

The typical attitude he says, is that “only someone who is not cool would be against it. It’s sold as if there’s no way to lose. The cannabis crowd has vastly overstated medical benefits, and those claims are not challenged. They vastly understate risks, and reporters have not challenged that.”

For every claim about benefits, there is a sad story about damage to memory, motivation and mental health, especially for young users whose access to pot expands under legalization. For every claim that marijuana reduces opioid use, there are addicts who say their training-wheels drug was pot.

If recreational use makes the ballot next November and loses again, Ohio could be the swing state that turns back the tide, Berenson says. And Boehner’s endorsement of legal pot is a big deal. “He’s not a liberal, not a Democrat, so obviously he’s going to help people accept it, and that is powerful.”

Boehner believes the scales may be tipped by aging boomers who turn to legal pot.

“When friends of mine hear that someone’s getting relief, they go get their medical marijuana card, go to a store and talk to the clerks,” he says. “It’s just a matter of time before it’s legal for recreational use all across the country.”

Berenson says there would be a nationwide backlash if police, teachers and parents knew the damage it is doing. “But if the media won’t tell the truth or do the work to find it out, they won’t know,” he says. “I try not to get too upset about it, but we are doing something terrible.”

They agree on one thing: We need more research, not more magic-mushroom promises. “If it’s not providing the benefits I thought, or causing all these other problems, I’d step away from it,” Boehner says. “This is where research is critical.”