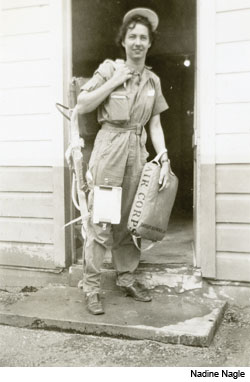 Women like Nadine Nagle took up flying during World War II so men could fight.Peter Bronson In a grainy old snapshot, Nadine Nagle wears a ball cap and a flight suit, with a parachute slung over one shoulder, a flight plan strapped to her leg and a booster-seat cushion in her hand, ready to climb into the cockpit of a World War II airplane.

It’s part of an exhibit at the National Museum of the U.S. Air Force in Dayton: “WASP: Breaking Ground for Today’s Female USAF Pilots.”

Nearby is a picture of Jaqueline “Jackie” Cochran, one of the greatest women in aviation history, whose records for speed, distance and altitude made her known as the “Speed Queen.”

Cochran flew aircraft to Great Britain before the United States entered World War II. She knew military leaders would someday realize that women could ferry aircraft to free men for combat. When the war started, she founded the Women’s Airforce Service Pilots (WASPs) to train hundreds of women pilots at Avenger Field in Sweetwater, Texas. One of those pilots was Nadine Nagle.

“I joined the Women’s Air Force Service in 1942. We were civil service,” Nagle recalls. “The Army Air Corps would not accept us. So we went through the Jackie Cochran training program. It was patterned exactly after the training of male cadets, with ground school, flight training, everything.”

The women served in the military, but would not be recognized as veterans by the U.S. government until 1977.

During the war, though, Nagle didn’t much care. She was just glad to do her part for her country. “After seven months of intensive training, I graduated with silver wings,” she says.

When the huge B-29 was introduced in 1944, many pilots were reluctant to fly it because it had a reputation for engine fires during takeoff. Their commander, Lt. Col. Paul Tibbets, recruited two WASPs to fly one in a demonstration. After that, there were no more complaints.

Nagle summed it up: “We did a little bit of everything.”

On a typical day, she would grab her parachute and seat cushion to ferry AT-6 Texans and BT-13 Valiant trainers from San Antonio to Garden City, Kan., training bases. Although Nagle flew long distances, “I never had any trouble with any of the aircraft at any time. But some of our pilots did. There were 38 women killed in the WASP program. One of them was my dear friend.”

Nagle was a trailblazer in aviation, and continued to lead the way after the war. “My whole life has been involved with women pilots,” she says from her home in Kettering. “I tell young women to choose words to live by.”

Hers are: “God, because I believe in God; integrity, to try to live a life of integrity; attitude, because it can make or break you; and family and friends, because we should always maintain happy relationships. They can help you in bad times and encourage you in good times.”

Her first husband, Dale Canfield, was killed as he flew a B-24 Liberator bomber over the coast of France to bomb German U-Boat bases. “I went into the service because he was killed. I didn’t know what to do, and when I heard about the opportunity I jumped on it right away.”

In 2010, Nagle was one of about 300 living WASPs who received the Congressional Gold Medal—the highest award for civilians. It was a long overdue recognition.

Adapted from Legacy of Courage II: New Stories of Honor Flight Veterans, available at local bookstores and from Honorflighttristate.org. All proceeds are used to send veterans to visit their memorials in Washington, D.C.