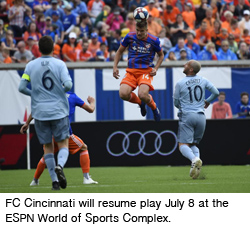 Your guide to the messy, unpredictable world of sports todayNoah Tong NASCAR, the PGA Tour and the Belmont Stakes may have returned to competition in the United States, but when will Cincinnati’s beloved teams get in on the action? In many instances, the future is unclear.

Three months after all sports were suspended indefinitely to slow the spread of COVID-19, it is apparent the virus is still very much a concern. In the last week:

– Cases are spiking in Florida, the host state in which MLS and the NBA plan to return, although health officials say Disney is still safe for all participants.

– Twenty eight student-athletes test positive at Clemson University, raising questions about the safety of college sports in the fall.

Positive cases may not spell the end of sports in 2020, but an outbreak certainly rings alarm bells.

Cincinnati’s Teams are a Mixed Bag

– FC Cincinnati, barring future complications, will resume play July 8 at the ESPN Wide World of Sports Complex. There is no official word yet on if teams will play again in their hometown this season.

– Trevor Bauer, a starting pitcher for the Cincinnati Reds, said he believed there was a 95%-100% chance there would be a shortened MLB season. The Major League Baseball owners and players recently agreed to a 60-game season. Players will be reporting to training camp by July 1, with games beginning July 24.

– Don’t expect to watch NFL games in-person at Paul Brown Stadium this year, but the NFL thinks there will be a football season. The Cincinnati Cyclones, meanwhile, are back on the ice in October.

There are good signs Cincinnatians can rally around some of their favorite team soon, but there just aren’t any guarantees.

– The Western & Southern Open will not be hosted in Mason this year. The tournament is moving to New York and will be played in conjunction with the U.S. Open.

– NBA commissioner Adam Silver is confident basketball will return, but a coalition of NBA athletes are uncertain about their safety in a “bubble” tournament. Some athletes also feel participating will distract from current social movements.

– The National Women’s Soccer League is aiming to be the first “team sport” to return on June 27. All games can be watched on CBS All Access.