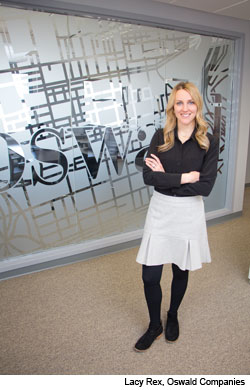 Businesses, large and small, may need more insurance to be fully protectedBill Ferguson Jr. Most consumers are familiar with the basic insurance products: Health, life, auto, and property and casualty are a part of almost everyone’s life in some way or another.

Not familiar to many are the various types of business insurance. Corporations or nonprofits—large and small—spend billions of dollars each year protecting the assets of their organizations. Even families who’ve spent generations building their businesses can benefit from a number of insurance products when something goes awry.

Lacy Rex, an associate client executive in the Cincinnati offices of Cleveland-based Oswald Companies, specializes in the various types of insurance that protect companies against loss. She says some key types of liability insurance can help businesses guard against lawsuits and losses.

“Directors and officers liability essentially is set up to protect the personal assets of the directors and executive officers, but it also extends to the entity itself, so the company and the balance sheet of the organization as well,” she says. “There are different types of directors and officers liability coverage, too—not-for-profit, private and public companies. It gets more granular from there. A lot of times, it has to be tailored to the organization and their needs.”

Rex says companies can request standard D&O policies that protect board members and officers, as well as the company, but policies can also be tailored to individuals who sit on several boards or are involved in nonprofits—these are called independent directors liability policies—so that they are protected in situations beyond a single board.

Oswald, an employee-owned insurer founded in 1893, is an independent insurance broker that works with a number of insurance carriers on a variety of products serving clients in all 50 states and globally.

“Every company has its own unique risks that we’re trying to protect,” Rex says. “For us, we put together Oswald-enhancement endorsements with all of our clients, so it amends the terms of the insurance contract to provide the best, most favorable terms. We pre-negotiate that on the front end; no matter the size of the client, they get the benefit of our intellectual property that we’ve invested in and partner with the carriers to get the best terms and conditions that we can in the marketplace.”

Lloyd’s marketed D&O insurance beginning in the 1930s, but it wasn’t until the 1980s that those policies became more common.

The price of D&O insurance policy premiums depends on various factors, but chiefly, “it’s more the size of the organization—revenues and assets, that type of thing,” Rex says. “If you’re a not-for-profit, they’re usually priced pretty aggressively, with lots of bells and whistles. For a private company, it’s going to be more traditional. If a company is doing poorly, it’s going to be much more expensive because, obviously, you’re seeing a downward trend. Potentially, you’re going to have more concerns for being sued.”

D&O claims can be costly. Chubb, another leading D&O policy underwriter, reported in its “2013 Private Company Risk Survey” that the average cost of a directors and officers event is $697,902, considering judgments, settlements, fines and legal fees. Citing a “2012 Directors and Officers Liability Survey” by Towers Watson, it said 27 percent of private companies and 33 percent of public companies surveyed faced a D&O claim in the past 10 years.

“If you don’t have D&O, you have to defend with the assets you have available,” Rex says. “It’s going to take away from other projects or the cash flow of the business. Claims can come from competitors, they can come from your clients or vendors—they can even come from your employees.”

She says many companies think that they don’t need directors and officers liability “because their corporation is structured in such a way that if you have a claim, it’s not going to pierce the corporate veil. I’ve seen some interesting claims where the claim began as a crime loss and culminated in another insurance carrier subrogating against another company. So I’ve seen a crime loss morph into a D&O loss. You just never know how a claim is going shake out.”

Rex says that beyond directors and officers liability policies, companies also should take a look at other coverages.

Sexual harassment would be covered by employment practices liability, just like any other claim that involves religious or age bias, or wrongful termination, or breach of contract, for instance.

As for the explosion in reports of sexual harassment, “Do we think that we’ll see more? Yeah, I think so,” Rex says. “More and more people are coming forward. It’s more socially acceptable to talk about.” That could lead to higher premiums, if more claims are made.

Fiduciary liability is another insurance that covers those who are involved in the management of pension, 401(k) and other employee-benefit plans. “We’re seeing an uptick in them because companies aren’t managing fees or understanding fees that are getting passed along to the plan members,” Rex says.

“We’re seeing a huge, huge uptick in social engineering claims under crime policies,” Rex says. “A third-party is fraudulently inducing someone within your organization to voluntarily—and that’s the key part, voluntarily—part with funds” through, say, a fraudulent email. Social engineering fraud is usually endorsed on the policy, she says, “so if you don’t see it, it’s probably not covered.”

Social engineering fraud would include an email purportedly from the chief executive officer to the chief financial officer, saying, “I’m tied up in meetings all day, we have a deal going that’s hush-hush, and I need you to transfer money to XYZ.” It looks official, so the CFO makes the transfer, only to discover later that the CEO did not send the email.

Kidnap and ransom coverage is less common, but companies that do business in dangerous locales could benefit.

Rex, an Indiana native with a history degree from Indiana University, started working in the insurance industry 12 years ago in Buffalo, New York. “What I do requires a lot of problem-solving. It’s not an off-the-shelf product. For me, one of the benefits of having a liberal-arts degree is having critical-thinking and problem-solving skills.”

She says she didn’t consider insurance in college, but “I love solving problems for people.”

When she approaches companies, even if they’ve had directors and officers liability coverage for years, she says she always asks, “Has anyone ever explained to you what it is?”

“A lot of my job is education,” she says.

It Can Happen to Anyone

Lacy Rex, associate client executive for Oswald Companies, cited the following as examples of the costs of insurance claims:

From Travelers Cos. Inc. (directors and officers claims):

– A former employee alleged he was terminated for complaining about unsafe work conditions. The matter settled for $35,000, but only after $70,000 was incurred in defense costs.