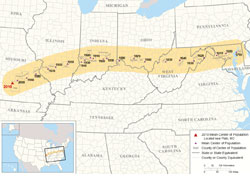 The 2020 Census has the power to reshape our story and how the region is perceivedDan Hurley In 2020 the United States, at the direction of the Constitution, will conduct the nation’s 24th census. The results of decennial enumeration of people living in the country will guide the reapportionment of representation and federal funding for states and localities beyond 2022. But the significance of the census goes far beyond those two mundane functions.

Today, data determines what companies choose to produce, what projects banks and venture capitalists will fund and what posts we see on our social media accounts. In 2020, data (even more than cash) is king. That concept was only primitively understood in 1789, but the inclusion of a command to systematically collect critical data marks the Constitution as one of the first modern documents.

The census has always done more than shape representation. It has also shaped the way communities think about their prospects. That has certainly been the case for Cincinnati.

The 1830 census counted 24,831 people living in Cincinnati. Fueled by a flood of immigrants after 1835, the city claimed 115,435 (over 48% foreign born) by 1850, and by 1860 to 161,044. In that 25-year period Cincinnati became America’s fastest growing and sixth largest city. Charles Cist, who oversaw the census locally, used the data he gathered about population, businesses and manufacturing to publish data-laden promotional descriptions of the city in 1841, 1851 and 1859.

Cincinnati’s tremendous growth fueled wild speculation about the city’s prospects. “Within one hundred years from this time,” Jacob Scott predicted in 1841, “Cincinnati will be the greatest city in America; and by the year of our Lord two thousand, the greatest city in the world.” Others speculated that Cincinnati’s prominence and central location would spark relocating the nation’s capital to Fourth and Vine.

When census results in 1870, 1880 and beyond revealed that Cincinnati’s earlier exponential growth had slowed and that places like Chicago and Kansas City were growing faster, Cincinnatians faced a psychological dilemma. If the city was no longer on track to become the nation’s greatest (measured by population size), what was its destiny?

The answer was that promoters in the 1870s and ‘80s shifted from focusing on the size of the city to stressing the quality of life. Cincinnatians began beautifying the city by creating Fountain Square (1871) and Music Hall (1878) and forming cultural organizations like the May Festival (1873), the Cincinnati Zoo (1875), the Cincinnati Art Museum (1886) and the Cincinnati Symphony Orchestra (1895). If Cincinnati could not be America’s biggest city, it sought to become its cultural capital, the “Paris of America.” To this day, promoters emphasize our cultural infrastructure.

And when the 1900, 1910 and 1920 census results revealed that immigrants no longer saw Cincinnati as an optimum place to settle, locals turned long-standing praise of immigration on its head. Suddenly, the lack of immigration and growing demographic homogeneity became a value. In 1921 a Cincinnati Times-Star editorial proudly referred to Cincinnati as the “most American city in the North,” not corrupted by troublesome Italian, Greek and Polish immigrants who were fueling the steel-based economies of Cleveland, Detroit and Milwaukee, but also challenging the political and social stability of those booming cities.

With the suburbanization of American cities after 1880, the traditional focus on city population became increasingly inadequate as an indicator of community dynamics. The political boundaries of the City of Cincinnati long since ceased to describe the actual economic and social dynamics of place. The center city population peaked in 1950 (503,998) and steadily contracted until 2010 (296,943).

To compensate for the changing reality of suburban sprawl, the Bureau of the Budget proposed what would become Metropolitan Statistical Areas in 1949 and formed the Cincinnati MSA in 1950 including Hamilton, Kenton and Campbell counties. Today, the Cincinnati-Middletown OH-KY-IN MSA has expanded to include 15 counties and 2,114,580 people and is ranked 29th largest in the country.

In many ways, we are still psychologically trapped in the sense that as a place, we peaked long ago and have been fighting to stem decline ever since. That worry has been of special concern to the last two Cincinnati mayors, Mark Mallory and John Cranley, who grasp at any hint that population contraction inside the city proper has bottomed out and begun to turn around. But the real issue is the slow growth character of the MSA, the functional community in which we live.

As data from the 2020 census is reported, pay attention to the population trends for the MSA. How much slower is our growth rate compared to the national average? Is our ranking as a MSA (currently 29th) rising or falling? How do we rank against other midwestern MSAs?

And most importantly, the Census Bureau may announce the combination of the Cincinnati and Dayton MSAs. That possibility has been anticipated for several census cycles. If such a move occurs, will we recognize it as an opportunity to think bigger, outside our current box? Or will we see it as an affront and close our eyes to the challenge and opportunity?