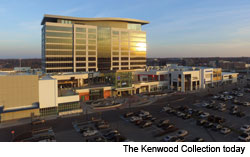 It took more than “I think I can” to make the Kenwood Collection into what it is today. We go behind the scenes with the company that transformed it from a shell to a success.Liz Engel There was a time when Kenwood Collection didn’t look like this.

Like its clothing shops and restaurants? Five years ago, there were none. Instead of a glassed-in skyscraping office tower, there were, in its place, rusting steel beams.

The story of the Collection’s fall—and rise—is perhaps widely known. The project, formerly known as Kenwood Towne Place, stalled just over a year after its ground breaking in 2007. Bear Creek Capital, the lead developer at the time, had stopped paying its subcontractors, and they walked off the job. A criminal investigation ensued. And a half-complete project sat for nearly half a decade within view of Interstate 71.

Phillips Edison’s Strategic Investment Fund bought it out of foreclosure in 2012. Many say, until then, it stood as one of the biggest physical symbols of the recent recession. But there’s much more to it than that.

Today, its new owners say it’s “no question” a success. They’ve built up the eight-story office tower, and it’s nearly fully leased, and, on the retail side, few vacancies remain across its two levels. But the path to get here was paved in drama.

“From the front end, there was a lot of bad press,” says Mark Wilhoite, chief development officer at PREP Property Group, a spinoff from Phillips Edison that’s now leading development at Kenwood Collection.

“You could say this project was sort of the poster child of the Great Recession. But it was a double whammy,” he adds. “What happened here with Bear Creek was atrocious. If Bear Creek had done the job, and had done it right, I don’t think the project would have looked like it did.”

For the Phillips Edison group, scooping up Kenwood Towne Place—it wasn’t renamed Kenwood Collection until 2013—came down solely to location. The property sat on East Galbraith Road next to Kenwood Towne Centre with unparalleled visibility for 120,000 vehicles a day.

A number of other buyers indicated interest, Wilhoite says. But Kenwood Towne Place proved complicated. “There was too much heavy lifting for them,” he wages a guess. For years, it sat.

“We looked at it as our opportunity, because it was a local project,” Wilhoite says. Phillips Edison maintains a local corporate office, and PREP, which branched off in May 2015, is Cincinnati based. “We said, ‘We live here. We know the market. We know it’s a strong property. Let’s try and get it.’”

The sale closed in 2012. Phillips Edison essentially inherited a shell. Or, as others would have it, an eyesore.

And, of the retailers that existed—Crate & Barrel, the Container Store, L.A. Fitness, Mitchell’s Salon—none were paying rent. “And understandably so,” Wilhoite says.

“The property was in receivership, which basically kept the lights on. The problem is, you had active tenants, which is complicated,” he adds. “Some had rights in their leases to [abate the rent]. Some didn’t. But at the end of the day, what’s anybody going to do? That was another big thing we had to tackle when we took over.”

Much of the first year was spent ironing out that and other legalese. Wilhoite says the team also modified the original design to separate the two uses, office and retail, and in early 2013, rolled out new branding. Messer Construction was hired as the project’s general contractor.

The Collection even landed Saks Fifth Avenue as an anchor and had a fully negotiated lease with the upscale department store. But Hudson Bay’s takeover in 2013 essentially nixed that deal. The paperwork was never signed.

Certainly, there’s no crystal ball, but Wilhoite says that loss was “honestly the best thing that could have happened.” The team had considered redesigning the Collection as either a three-story or two-story extended mall to satisfy Saks, an “outrageously” expensive move that could have proved tough on existing tenants.

Instead, Wilhoite says the team nixed the big-box concept altogether and envisioned a retail center with smaller shops and restaurants and a grocery anchor. That meant for some demolition—another risk, but one that helped pave the way for L.L. Bean, Old Navy, Cyclebar, Crunch Fitness, Matt the Miller’s Tavern, Pies & Pints, Z Gallerie and Mitchell’s Gold + Bob Williams. Envision Cinema will open in late 2018.

“We’re probably the only developer in the business to tear out 70,000 square feet of leasable area to create public space,” Wilhoite says. “And that’s one thing that’s really unique here. We wanted an experience, which is the plaza. But behind the scenes? We had too much retail. The depths were too deep, and the tenants we were looking for, we wanted more of a lifestyle product. At the end of the day, the project we built was the right thing for the market.”

In the meantime, work wrapped on the office tower in October 2015. PREP and broker Jones Lang LaSalle (JJL) made quick work there, inking Merrill Lynch, Unlimited Systems, The Hauser Group, RoundTower Technologies and others.

Today, the tower, at 292,000 square feet, is 96 percent occupied, Wilhoite says. Technology companies, in particular, are in love.

“The way the building looked—the swoop of the roof, and all that new glass—and where it was located, they wanted to be here,’” Wilhoite says.

Now, the only key missing link is that grocery store anchor. Whole Foods 365 has been pending at Kenwood Collection since first announced in 2015. Wilhoite hopes the store will open sometime in 2018—Whole Foods wants to further test its 365 concept, which is new, and navigate its 2017 acquisition by Amazon.

“We’re almost to a stabilized basis, which is our goal with all these projects,” he says. “Everybody is paying rent—even Whole Foods; they’re paying full rent, which is sort of unique when a store’s not open.”

Wilhoite calls Kenwood Collection the “best project” he’s ever worked in terms of its “complexity, excitement, notoriety.” But he’s most proud they were able to bring back a handful of contractors who “were hung out to dry” in the Bear Creek fiasco. More than 60 contractors were owed more than $40 million after the project went bust, according to Cincinnati law firm Benjamin, Yocum & Heather, which represented 15 of them in recovery efforts. Dozens of others received little to nothing.

In November 2012, Matt Daniels, Bear Creek Capital managing director, was indicted on 25 counts of conspiracy, fraud and money laundering in a case investigated by the FBI and IRS, Hamilton County Sheriff’s Department and the U.S. Attorney’s Office. Officials said Daniels diverted funds from Kenwood Towne Place for his personal use, and concealed the status of the project to lenders.

He was acquitted in December 2013. He and his legal team maintained mistakes were made, but nothing illegal. Daniels is now a principal at Meridian Realty Capital on Montgomery Road.

“What happened here with Bear Creek was atrocious,” Wilhoite says. “Somebody could write a book just about that piece of it. But for the contractors left for dead, instead of some of those guys losing everything, they were able to come back and work with us. And at the end of the day, those guys were some of the best contractors we dealt with. To us, it was a win-win.”

And in the end, Kenwood Collection stands as a shell no more.