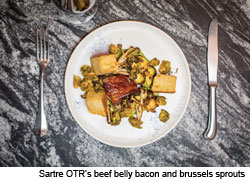 Sartre OTR takes inspiration from France and French cuisine to create its menuWill Jones Only open for about six months, Sartre OTR, located at 1910 Elm St. in Over-the-Rhine, is already making an impression.

“My entire training is rooted in French cuisine; from the culinary school I went to, to my first job and every job I’ve had since, the foundation has been French-inspired,” says General Manager Randy Diedling. “We’re not trying to be a French restaurant. We’re trying to be a great restaurant. Our inspiration comes from France and the French aesthetic, the idea of how they look at things and how they do it. That’s what’s more important to us.”

Rhinegiest, one of Cincinnati’s premier breweries, was looking to open a food operation within its building. Owner Jim Cornwell saw that as an opportunity to form a partnership to bring a unique dining experience in OTR. “I love the revitalization that’s going on. It’s such a beautiful neighborhood. There’s so many historic and beautiful buildings down here. I appreciate the group effort to preserve this entire neighborhood,” Cornwell says. Noting that many dining experiences in OTR often have to resort to compact seating out of necessity, Cornwall developed Sartre to be one of the few eateries in Over-the-Rhine that allow guests to dine in spacious booths in a lounge setting.

“We’re in a really good position with the amount of space we have where we can design anything we want,” Cornwell says.

When it comes to the food, Chef Justin Uchtman says there is a process to the time spent making Sartre’s savory items. He says, “The amount of work and detail that goes into our chicken dishes is something I don’t see many restaurants doing.”

Guests are encouraged to try the roasted chicken “porchetta” parmesan broth with braised root vegetables. To create this entrée, the chicken is deboned and stuffed with a mousse. After it has been poached and roasted, a chicken parmesan consommé is drizzled on top for a finishing touch.

Guests also have the option to enjoy the beef belly bacon and brussels sprouts in which the beef is cured for a week and then hot-smoked with applewood.

“There is a lot of work that goes into our dishes. I think that’s what allows our food to stand out over others,” Uchtman says. Guests are invited during the hours of 5-9 p.m. Wednesday, Thursday and Sunday, and 5-10 p.m. Friday and Saturday every week. When asked what guests should expect, Diedling says, “A big part of what we want is for the restaurant to be what the guests want it to be. If they want to come down in a suit and tie, that’s fine. If they want to come in jeans and a T-shirt after shopping at Findlay Market, that’s fine as well.”