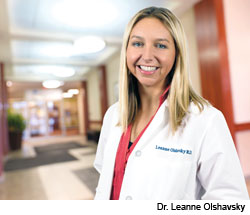 Local physicians say they’re here to help women as they enter a new stage of their livesDeborah Rutledge Menopause is a condition whose onset and symptoms are as non-specific and confounding as its slightly ominous-sounding nickname, The Change.

While not any kind of medical board-approved definition, it is the anecdotal observance of local OB-GYNs who are seeing large numbers of patients in this stage of their lives.

They agree pinpointing menopause’s onset and correctly attributing symptoms to it is made all the more tricky by the time of life when it hits.

It often is a time when children are getting older, perhaps needing fewer rides, or heading to college and leaving behind an empty nest. So as a woman’s ovaries start slowing down—anytime from as early as 45 to 55—her metabolism, lifestyle and schedule could be undergoing change, too, says Dr. Leanne Olshavsky, an OB-GYN with The Christ Hospital Health Network.

Adding to the confusion are some new health care companies’ recommendations for less frequent examinations after the fertility years, says Dr. Dennis Wiwi, an OB-GYN at the Seven Hills Women’s Health Centers.

“After fertility, some insurance companies are [advising visits] every two to five years, but [patients] still should be seen every year—it’s probably most critical to be seen every year,” in this life stage, Wiwi says.

Seeing their OB-GYN will help patients be their own health advocate, gain a better understanding of their own menopause experience and where they are on that continuum.

“A lot of women feel better after a nice sit down about menopause,” with their doctor, says Olshavsky.

Menopause is defined as a full year without the occurrence of a period, which happens at an average age of 51 or 52, although the actual age varies greatly by individual, Olshavksy says. The run-up to that is a stage called perimenopause, when the cycle could become irregular as the ovaries ramp down their secretion of hormones estrogen and progesterone.

The symptoms of menopause seem to be as varied as the age of onset. Hot flashes, which occur because the lack of estrogen production causes blood vessels to spasm and create heat waves throughout the body, vary in intensity and frequency by the individual, Wiwi says.

The severity of hot flashes “depends on who you ask,” says Olshavsky. “Most people tolerate it really well, but they’re very variable in how annoying they are and how impactful they are in someone’s life.”

If hot flashes cause sleep disruption that negatively impacts someone’s functioning, then it is time to seek help, she adds.

But here again, a patient’s OB-GYN is the best quarterback of care for her to consult first regarding the remedies that may be pitched to on the internet or in commercials.

The OB-GYN or primary doctor knows the latest treatments and can evaluate the risks of other advertised treatments for menopausal symptoms, Wiwi says.

For instance, a physician can advise that taking black cohosh for hot flashes or vaginal dryness may also cause irregular heartbeat if taken longer than six months, he says.

Hormone replacements offered by some advertisers can be deceiving, especially with saliva testing, or if the entity promises to run hormone panels on a patient and then adjust their hormone levels “back to normal levels,” Wiwi says.

Physicians say it is better to be wary of such promises from suppliers whose medications and their potencies may be uncontrolled, and instead look to their physicians to understand and manage their hormone levels.

Compounding pharmacies may have their place in the medical field, but it is important to realize that they do not have the same strict oversight that the FDA does, says Olshavksy. It is also important to note that bioidentical hormone medications also carry risks that should be discussed with a physician before using, she adds.

“You have to look at the whole picture,” of the patient and her health, Wiwi adds.

Physicians also understand the intended and actual effects of hormones, and can help evaluate who would benefit from those or other therapies.

For example, estrogen helps with menopausal symptoms, but actually only two, says Olshavksy.

“When we look at scientific studies, if you give medication to treat menopausal symptoms, the only things that get better are hot flashes and vaginal dryness,” Olshavsky says.

While estrogen helps with symptoms, progesterone should only be called for in cases when a patient still has her uterus, she says, since progesterone keeps the uterine lining from getting too thick and producing abnormal, potentially cancerous cells.

Vaginal dryness, which can lead to painful intercourse or bladder infections, can be treated through local estrogen creams or a more recent procedure called the MonaLisa laser, which creates microabrasions to stimulate new cells and blood vessels, says Wiwi.

The three-time in-office treatment is pain-free and takes five minutes, he says.

“The nice thing is we’ve got options,” Wiwi says.